Home Sport Nadal out of Italian Open after QF defeat 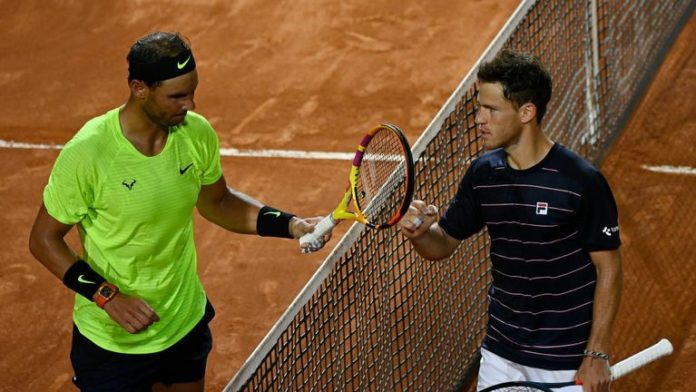 Rafael Nadal crashed out in the quarter-finals of the Italian Open as he suffered a straight-sets defeat to Diego Schwartzman.

Nadal, the defending champion and nine-time winner, was beaten 6-2 7-5 by Schwartzman in Rome after two hours and four minutes.

The Spaniard had won all nine of his previous meetings against the Argentine but Schwartzman dictated the baseline rallies and produced a series of drop-shot winners. In contrast, Nadal uncharacteristically made unforced errors and struggled to get his first serve into play.

“We can find excuses, but I didn’t play well enough. Then we have to think internally, ‘Why? How I can fix it?'” Nadal said on the ATP’s website.

What a performance from @dieschwartzman 🤯

He beats Nadal for the first time at the @InteBNLdItalia 👏 pic.twitter.com/eLSILK924n

“After such a long time without competing, I played two good matches, and now I played a bad one against a good opponent. That’s how it is. I just want to congratulate Diego and I’m going to keep working.”

The Italian Open marked Nadal’s competitive tournament since winning a title in Acapulco in February. He now has one week to re-group before he attempts to win a record-extending 13th French Open title.

Meanwhile, Schwartzman will face Canada’s Denis Shapovalov for a place in the final, after Shapovalov triumphed against Grigor Dimitrov 6-2 3-6 6-2.

He’ll take on Casper Ruud for a place in the final. pic.twitter.com/kzTusIvgoL

Novak Djokovic progressed into the semi-finals with a 6-3 4-6 6-3 victory over qualifier Dominik Koepfer.

The world No 1 started strongly and notched up the first four games in succession, before Koepfer served notice that it might not be an easy afternoon for his opponent.

The German broke the Serb twice in a row and although he didn’t win the first set, he began to frustrate him.

Djokovic moved 3-1 ahead in the second set before smashing his racket to the court after dropping serve in the next game.

Despite these bumps in the road, and Djokovic converting just six of the 21 break points he created, he ultimately used his experience to get the job done.

Since his default at the US Open, there’s added attention on his behaviour on-court, and after he discussed his loss of composure against Koepfer.

“Let me tell you that it’s not the first nor the last racket that I’ll break in my career,” Djokovic said.

“I have done it before. I’ll probably do it again. I don’t want to do it, but when it comes, it happens. That’s how I release sometimes my anger.

“And it’s definitely not the best message out there, especially for the young tennis players looking at me. I don’t encourage that, definitely. But, look, we’re all people. We all do our best.”

Ths semi-final will be Ruud’s first at the Masters 1000 level, in comparison to it being Djokovic’s 69th.