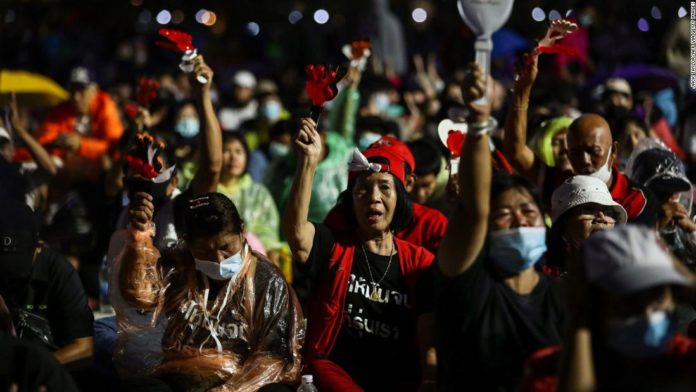 Thousands gathered in the nation’s capital for this weekend’s rallies, which began on Saturday and were part of a protest movement that has been gaining momentum since July.
Student leader and activist Panasaya “Rung” Sitthijirawattanakul, 21, took to a public stage late Saturday to directly address Thailand’s King Vajiralongkorn — an act that, under strict national laws, could be punishable by 15 years in jail if her comments are considered defamatory to the monarchy.
The lese majeste laws mean CNN has limits in reporting the full context surrounding the Thai monarchy and its palace intrigue.
Panasaya listed to the crowd the ten demands of the United Front of Thammasat and Demonstration, a student union group of which she is the spokesperson. They include revoking laws against defaming the monarchy, a new constitution, abolishing royal offices, ousting the military junta and disbanding the king’s royal guards.
In an interview with CNN, Panasaya said: “I mean no harm to the monarchy.” But she also shared a message to the king: “You should reform it so that the monarchy can continue to exist in Thailand … If you pay attention to what I am saying, I’d like you to consider our demands.”
On Sunday, with thousands still out, a group from the rally announced it intended to deliver the ten demands to the Privy Council, the king’s advisers.
However, Panasaya and other marchers were stopped by police as they attempted to approach the council. In an exchange broadcast live on television, Panasaya instead agreed to hand the demands to police, and declared a victory for protesters.
Speaking to the crowds before they dispersed, protest leader Parit “Penguin” Chiwarak said: “Our victory is that we handed our letter directly to the king, so we can show that everyone is equal. Everyone has the same blood color — it’s red. Thank you everyone for celebrating our victory. We told people to raise their hand.”
Parit said the movement would continue to pursue its goals peacefully.
“We achieved all of this by non-violent methods and we will uphold the principle of non-violence in our movement,” Parit said Sunday.
On Sunday protesters also installed a “people’s plaque” near the Thai Royal Palace, commemorating their movement as the “vanguard of democracy.”
“Here, the people declare that this place belongs to the people, not the King,” the plaque reads. Protest leaders said it was a replacement for another plaque that had marked the end of monarchic rule in 1932, but went missing in 2017.
Thai Prime Minister Gen. Prayut Chan-O-Cha on Sunday “expressed his gratitude to officers and all the people who have jointly cooperated to end the situation peacefully,” according to a statement from his official spokesman Anucha Burapachaisri.
“Both the protesters and officers have avoided confrontation and instigation which could lead to an unnecessarily tense situation,” the statement read.
“The government has the intention to allow people to lawfully express their rights under the constitution.”
Asked about the submission of a reform letter to the king, Burapachaisri said: “I am aware of their demands about monarchy reform from listening to their speeches on the stage but I don’t have them in detail yet. I would need time to gather info before we have further comments on this.”

Ahead of this weekend, official figures had tried to dissuade protesters from turning out — and dispel fears that the rallies could turn violent.
On Thursday, the Prime Minister warned protesters they could cause economic destruction if coronavirus spreads at gatherings, though he didn’t name protest groups individually or specifically address the planned weekend rallies.
And in a briefing on Saturday morning, the commander of the Thai Royal Police told people not to believe what he called rumors that police will “suppress the mobs,” and urged officers not to react if “provoked.”
Later that afternoon, protest leaders pushed open the gates of Thammasat University, a heart of student activism in Thailand. They gathered on the campus and at Sanam Luang, a public square near the king’s official residence at the Grand Palace.
This comes after two months of almost daily demonstrations, including one in Bangkok with an estimated 10,000 people on August 16. The movement began with students in towns across the country — but has since attracted a large cross-section of society.
Protesters and their supporters are calling for a range of institutional changes; for instance, Pita Limjaroenrat of the opposition Move Forward Party said his group will propose a council meeting to “re-write the constitution peacefully.”
The best solution, Limjaroenrat says, is to elect a “group of persons” to re-write it. He told the media that if change does not occur in the country “the people will keep coming out on the street.”
But among these grievances, reforming the monarchy is becoming the central demand. At a previous protest on August 10, Panusaya read out a series of demands for palace reform, that include ensuring a genuine constitutional monarchy that places the monarch under the constitution.
That is a radical idea in Thailand, where the powerful royal institution is regarded by many with deity-like reverence — but dissatisfaction, especially among Thai youth, has been simmering for years.

Thailand has endured years of political upheaval. A military coup in 2014 was followed by failed promises to restore democracy, and what activists say is a repression of civil rights and freedoms.
Activists say they are fed up with injustices such as the military’s continued hold on power through the constitution, the prolonged coronavirus state of emergency — which they say is being used to stifle political opposition and free speech — and a flailing economy that offers them little job prospects, as well as the disappearance of democracy activists living in exile.
It’s within this atmosphere that their ire is now being directed toward King Maha Vajiralongkorn, who assumed the throne in 2016 and was crowned in May 2019.
Vajiralongkorn is believed to spend much of his time overseas and has been largely absent from public life in Thailand as the country grappled with the coronavirus pandemic.
Since becoming King, billions of dollars worth of assets held by the Thai Crown have been transferred to Vajiralongkorn, asserting his control of royal finances and vastly increasing his personal wealth.
The Crown Property Act, passed in 1936, reorganized the Thai royal family’s assets into separate categorizes for royal assets. The repeal of the act meant that the Crown’s and the King’s personal holdings were placed into a single category to be administered by King Vajiralongkorn.
Although the absolute monarchy was abolished in Thailand in 1932, the monarch still wields significant political influence. Thais are still expected to follow a long tradition of worshiping the royal institution.
Change appears to taking root, however.
At schools in Bangkok and southern Thailand last month video posted to social media showed students singing the national anthem while wearing white ribbons and making the three-fingered salute from the “Hunger Games” movie franchise, which has become a symbol of defiance against the Thai government since the military coup.
CNN cannot independently verify the videos.
Traditionally, Thai citizens are supposed to stand still to pay respects to the anthem — played twice daily in public spaces — and the rule is even stricter in schools.
“The protests in Thailand are historic because this is the first time in Thailand’s history that urban demonstrators have demanded such reforms,” Paul Chambers, a lecturer and special adviser at Naresuan University’s Center of ASEAN Community Studies, told CNN last month.

CNN’s Jaide Garcia and Emma Reynolds contributed to this report.