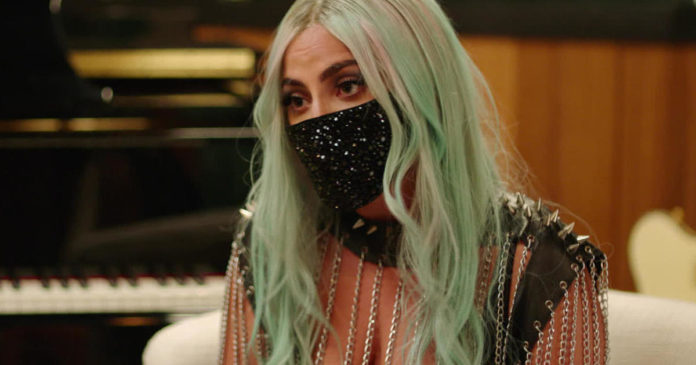 The parade of fashionable face-wear at this year’s MTV Video Music Awards worn by Lady Gaga, the monster of messaging, turned a public health recommendation into what she calls a simple act of kindness.

“You’re kind right now; you’re wearing a mask in this interview with me,” Gaga told “Sunday Morning” correspondent Lee Cowan. “We have cameras around us. Everybody here has a mask on. These are kind acts!”

To reinforce her message, she instructed her audience, “Wear a mask!”

We weren’t ones to argue!

She had invited us into her home after all, one once owned by the late Frank Zappa.  It was in his studio where she recorded her latest album, “Chromatica,” which, despite the pandemic, is her sixth consecutive #1 album.

“There’s not one song on that record that’s not true, not one,” she said.

“Chromatica” is a dance party – a return to her electro-pop roots. But when you listen to the lyrics, it’s more like a diary … and not a happy one.

I didn’t ask for a free ride
I only asked you to show me a real good time
I never asked for the rainfall
At least I showed up, you showed me nothing at all

Cowan asked, “What was the darkness? What was so dark about that particular time?”

“I mean, honestly, Lee, I just totally gave up on myself,” Gaga said. “I hated being famous. I hated being a star. I felt exhausted and used up.”

Used up not by the industry or her fans, but by the very entity she invented. Lady Gaga had cast such a long shadow that Stefani
Germanotta (her real name) was all but left behind.

She gestured to the piano in her studio:  “This is the piano I’ve had for so many years. I’ve written so many songs on this piano,” she said. But despite her love for the instrument, she admitted that her attitude changed: “I don’t know how to explain it. But I went from looking at this piano, and thinking, You ruined my life. During that time, I was like, You made me Lady Gaga. My biggest enemy is Lady Gaga. That’s what I was thinking: My biggest enemy is her.  What did you do?

To her piano she’d say, “Why you gotta be like that?”

The last time “Sunday Morning” met with Lady Gaga was back in 2016, where Cowan joined a toned-down Gaga in Central Park, while she was promoting her previous album, “Joanne.” It was named after her father’s sister, who died at only 19.

“I was writing about his trauma from my father’s life that became my trauma in a lot of ways, and I thought I could fix my dad,” she said.

“Did it work?” Cowan asked.

Invisible and insidious. Combined with the PTSD from being sexually assaulted at 19 – something she didn’t even talk about until a few years ago – those close to her knew the dangers.

“The people around me, they lifted me up, and they said, ‘You think you’re drowning, but you’re not.  You’re still amazing.’ And I used to go, ‘I’m not amazing. I’m over.'”

“You really felt like it was over?” asked Cowan.

“I didn’t really understand why I should live other than to be there for my family.” She replied. “That was an actual real thought and feeling: Why should I stick around?“

“Did you think about suicide?”

“Yeah. I lived in this house while people watched me for a couple years, to make sure that I was safe,” she said.

Her mental anguish presented physical pain, too. In her 2017 Netflix documentary, “Gaga: 5 Foot Two,” it was on full display.

She said, “Most of the time it is triggered by objectification. If I’m at the grocery store, and somebody comes up very close to me and puts a cellphone right in my face, and just starts taking pictures … “

And the lyrics of “Chromatica” reflect that pain…

“‘Pop a 911,’ that’s a reference to the medication that I have to take when I used to panic, because I’m Lady Gaga,” she said.

Critics might say if it’s that painful, why not stop being a pop star? Stop writing, stop touring, be content with what you’ve achieved?

Not possible, she says.  “Lee, I swear on my future unborn children! I don’t know why, but I have to,” she said. “This, I have to do it. Singing, I have to. Turns out, even if I don’t wanna be alive, I still know how to write a song!”

Indeed she does. “Rain on Me,” a duet with Ariana Grande, took home the Video Music Award for Best Song this year – and it also earned her a new friend.

“I like that girl,” Gaga said. “You know how hard it is to make a female friend in this business?”

“I can’t imagine, especially for both of you that are so – “

“Come on, in this business, having a female friend’s like watching a pig fly,” Gaga said.

Elton John, who also appears on the album, was there to help, too: “He always calls me when I’m down. And that usually means I don’t pick up the phone, ’cause I isolate myself. And then I’ll get a message that they’re thinking of me.”
Cowan said, “I’m so sorry you had to go through all of that. But I guess you’re not, in some ways.”

She said she’s doing better now, both mentally and physically. In fact, she’s putting out a new book this week called “Channel Kindness.”

It’s a collection of stories sent to her by young adults about the power of kindness in the midst of adversity.

“Take it from me, if you isolate yourself for too long, you end up staring off into space somewhere by yourself,” she said.

Maybe “Chromatica” was just one big therapy session – relationship counseling with herself. Whatever it was, it worked. As she put it, Lady Gaga and Stefani Germanotta have both radically accepted what can, and can’t, be changed.

You can stream Lady Gaga’s album “Chromatica” by clicking on the embed below (Free Spotify registration required to hear the tracks in full):