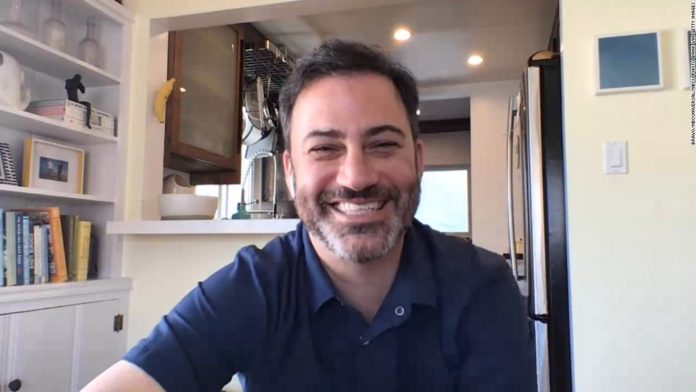 The idea for the lighthearted account, which awards a numeric rating to the settings that appear behind notable names during virtual appearances on cable news and other television programs, started off as a series of funny exchanges between a dating duo separated by an international border during a pandemic.
Months later, the account, which has gained responses from the likes of Hillary Clinton and followers like Jason Bateman and Ava DuVernay, is the unofficial authority on the art of the video call background. And as Hollywood sets the stage for a major virtual event with the upcoming Emmy Awards — not to mention that there seems to be no end in sight for the necessary evil of video call life — it’s also more relevant than ever.
Emmy producers have said they’ll have as many as 140 live camera feeds from the homes and other locales where nominees will be “attending” next week’s show.
Claude Taylor, the chair of a left-leaning political action committee called Mad Dog, and his girlfriend Jessie Bahrey, who lives in Vancouver, never intended to become experts in background design. But with almost 300,000 followers and scores of high-profile fans, the influence wielded by the, in Taylor’s words, “fluffy Twitter account” is undeniable.
“It’s not meant to be taken seriously,” said Taylor, who has used the account as a platform for some charitable efforts, like buying personal protective equipment for first responders and various Native American communities. “We’re, honestly, for the most part, just trying to have fun with it.”
With “fun” in mind, CNN asked Taylor for some helpful tips for Emmy nominees who, regardless of whether they actually win a statue, want to put their best background forward and earn gold from Room Rater.

There has been a dramatic increase in quality since the days Taylor and Bahrey would exchange casual commentary on rooms they’d see while watching cable news. (As someone whose work is “politics adjacent,” Taylor watches a lot of it.) Part of this could be attributed to lessons people have learned from others’ mistakes.
One of the most common offenses is what the pair often refers to as the “hostage” set-up — a person placed against a flat, blank wall. People like Lin Manuel Miranda and Derek Hough have fallen victim to this.
To avoid it, people should place themselves in rooms with depth and that have different eye-pleasing elements peppered evenly throughout the video frame.
“You want to be able to start at the front of the room where the speaker is and have the eyes drawn back through the room,” Taylor said. “So you might have an interesting bookcase on the back wall. You’ve got art on the left and right walls. You’ve got a nice lamp. You’ve got plants. Those are the elements that tend to work.”
“If there’s such thing as too many plants or too much plants, I’ve not seen it,” said Taylor. “I certainly haven’t penalized it.”
He said plants are “a way to add character and color and personality to a room,” but acknowledged that not everyone has a green thumb. He recommended flowers as a nice alternative.
“But if you don’t even want to do that, there are ways to achieve the same objective, which is to have color and character and personality in the room,” he said. “What you want to avoid is the extreme end of the scale, which is the hostage video — the blank wall, usually shot from the wrong angle.”
Incorporating books seems like an easy way to add class to a shot, but Taylor said they should be used with finesse.
“Sometimes there’s too much of an emphasis on books in general. You can create a good room with books; you can create a good room without books,” he said. “But If you go books, there are things we feel are must avoids.”
One of those is color coding. That’s one of Taylor’s pet peeves and means an automatic three point deduction, meaning the highest achievable score for a book color coder is a seven out of ten.
Color coding, he said, “treats books as props, and they’re more than props.”
“And it’s just a silly way to organize a book collection. Like, ‘It’s Tuesday. I’m in the mood for something yellow!’ That’s a hill we’ve chosen to die on,” he said.
People should also avoid too many horizontally stacked books. (“Again, that’s not how books are sorted,” he said.)
If someone chooses to have some, they should only do so to a “limited, reasonable number.”
Lamps are a tricky element in that Taylor prefers to see them on when featured in shots, but to avoid being backlit, proper balance should be reached by having a light off camera — such as a ring light.
“A lot of people try to rely in my opinion too much on natural lighting. It just ends up being washed out,” he said. “People who are better at it, you’ll actually see have windows pretty carefully muted.”
Above all, he said, it’s important to note they rate their rooms in good humor.
“We’re not trying to make this impossible,” he said. “I don’t think the account would be much fun if everybody was a three and a four and a five, you know?”