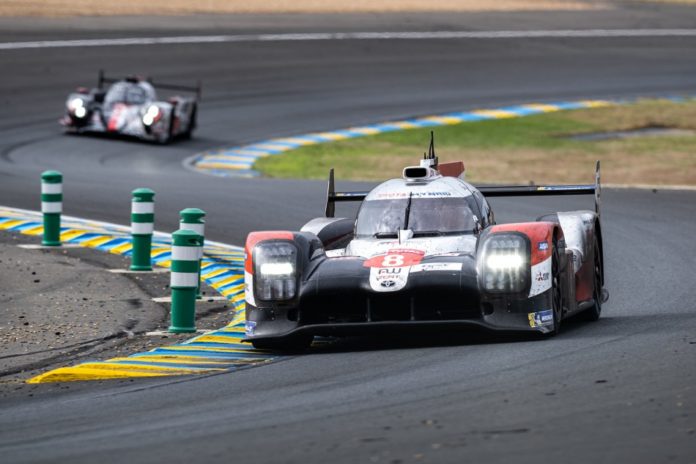 The 2020 24 Hours of Le Mans, Round 7 of the 2019/20 FIA World Endurance Championship, finished with a third victory in a row for the no8 Toyota Gazoo Racing and for Kazuki Nakajima and Sebastien Buemi, while Brendon Hartley celebrates his second overall win at La Sarthe, once with Porsche and now with Toyota.

The no1 Rebellion Racing R13 of Bruno Senna, Gustavo Menezes and Norman Nato finished second five laps behind the winning Toyota and one lap ahead of the no7 TS050 Hybrid, which had dropped back to 4th when the turbo was replaced and then later was reported to have floor damage. The fastest lap of the race was set by Bruno Senna, the Brazilian setting a 3m19.264 on lap 4.

In LMGTE Pro Aston Martin came out on top after a titanic struggle with Ferrari for most of the race.  The no97 Vantage of Alex Lynn, Maxime Martin and Harry Tincknell finished over 90 seconds ahead of the no51 AF Corse Ferrari of James Calado, Alessandro Pier Guidi and Daniel Serra, the trio trying their hardest to repeat their 2019 success.

The no71 AF Corse looked on course to take the final podium place but stopped on the last lap, handing the third spot on the podium to the no95 Aston Martin Racing Vantage.

The LMP2 victory went down to the wire when the no22 United Autosports Oreca, with Phil Hanson driving, headed to the pits for a late stop.  This allowed Anthony Davidson in the no38 JOTA Oreca to close the gap to the lead car but Davidson also had to stop for a last time, handing the advantage back to Hanson, who duly too the chequered flag to take a famous victory at Le Mans for himself, Filipe Albuquerque and Paul Di Resta.

Davidson took second, 32 seconds behind the United Autosports Oreca with the no31 Panis Racing Oreca in third, 2 laps down.

The no77 Dempsey Proton Racing Porsche was second, 49 seconds behind the TF Sport Vantage with the no83 AF Corse Ferrari in third place, Nicklas Nielsen only three seconds behind Matt Campbell at the flag.

With just one race of the 2019/20 FIA World Endurance Championship remaining, the 8 Hours of Bahrain in November, some of titles have been provisionally decided this weekend at Le Mans.

Toyota claim their second FIA World Endurance LMP1 Championship title, while Aston Martin become the 2019/20 FIA World Endurance GT Manufacturers Champions, joining Ferrari (2017) and Porsche (2018/19).  The driver’s titles for both the LMP and GTE world championships will be decided at the last race in November.

The LMP2 Teams title have been won by the no22 United Autosports Oreca, with Filipe Albuquerque and Phil Hanson claiming the drivers crown after Paul Di Resta missed a race earlier in the season.

The LMGTE Am titles have yet to be decided and we will have to wait until the season finale held on Saturday 14 November.