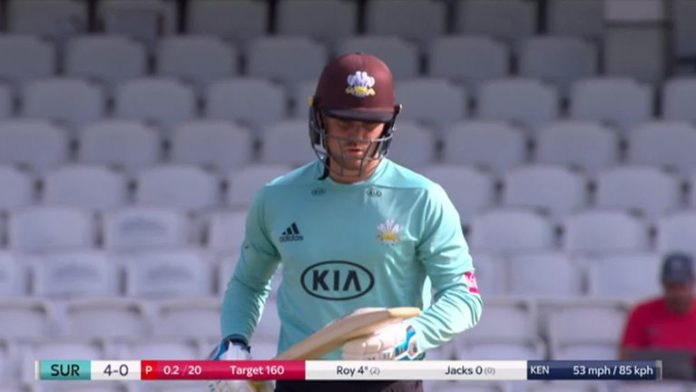 Northamptonshire booked their place in the Vitality Blast quarter-finals with a stunning three-wicket victory over Birmingham Bears at Edgbaston.

A wildly fluctuating match went the Steelbacks’ way in the closing stages as Tom Taylor (50 not out) and Graeme White (37no) saw them collect an unlikely 73 runs from the last six overs.

Hose blasted his maiden T20 century, scoring 119 from 64 balls – including seven sixes and nine fours). Mousley struck a T20-best unbeaten 58 from 44 balls, including a six and five fours.

The Steelbacks’ reply hit trouble at 28-3 and 71-6 but Taylor, making his debut after moving from Leicestershire, and White hit cleanly to see their side home with seven balls to spare – and enable the Foxes to earn a last-eight spot at Birmingham’s expense. Birmingham vs Northants scorecard

Sussex survived a wobble with the bat and some big-hitting from Paul Walter to clinch a spot in the quarter-finals with victory by four wickets at Essex.

Chasing 137 for victory at Chelmsford, Sharks were indebted to George Garton as they ensured second place in the South Group.

Garton claimed 4-21 with the ball and then hit 34 not out to ensure Jason Gillespie’s side finished with 13 points.

It may have been more straightforward had Walter not rescued the Eagles with a stunning array of hitting in a score of 76 off 45 balls, but in the end the holders exited the competition with a sixth defeat from their 10 games. Essex vs Sussex scorecard

Leicestershire skipper Colin Ackermann produced a fine bowling display as the Foxes beat Lancashire by 22 runs at Emirates Old Trafford to sneak into the last eight.

Ackermann took 3-18, all his wickets being taken in the same over, as the home side managed only 132-5 in reply to the Foxes’ 154-5, an effort that had included valuable knocks of 43 and 49 Nick Welch and Arron Lilley. Lancs vs Leics scorecard

Jason Roy returned to form with 72 and Laurie Evans hit a magnificent 45-ball 73 as Surrey clinched a home quarter-final after beating Kent Spitfires by six wickets at the Kia Oval.

Knowing they could lose the game but still qualify as South Group winners by staying ahead of second-placed Kent on net run rate, Surrey captain Rory Burns chose to bowl first so that they would have two run targets when they chased Kent’s 159-8.

Their first task was to score 127, and thus guarantee a better net run rate than Kent, and a superb second-wicket stand of 135 in 14 overs between Roy and Evans saw them cruise to that initial target in 14.3 overs.

Sam Billings earlier hit six fours in his 50 off 33 balls for Kent, who are also assured of a place in the knock-out stages, while Liam Plunkett was outstanding with the ball for Surrey on a slow, used surface as he took 3-19 from four skilful overs. Surrey vs Kent scorecard

Ian Cockbain played the starring role as Gloucestershire eliminated arch-rivals Somerset from the Blast with a thrilling two-wicket Central Group win at the Bristol County Ground.

The visitors posted 161-7 after winning the toss under cloudless skies, Lewis Gregory hitting 50 and Babar Azam 42. Tom Smith was the pick of the Gloucestershire bowlers with 2-25.

In reply, Gloucestershire reached 163-8 off the final ball of the match, Smith hitting a boundary off Ollie Sale. Cockbain had set up the victory with a brilliant 89 off 57 balls, including 9 fours and 3 sixes.

The result means a home quarter-final for the hosts, while Somerset were left to reflect on a bitterly disappointing campaign. Gloucs vs Somerset scorecard

Shaheen Afridi took four wickets in four balls as his six-wicket haul made sure Hampshire ended their horrific Blast campaign with victory over Middlesex.

Having returned a disappointing 1-191 in his first six outings, he celebrated an incredible 6-19 – Hampshire’s best ever T20 bowling figures, and the county’s second format treble in their history.

It meant Hampshire ended a six-game losing spell to win by 22 runs, although it could not prevent them from finishing bottom of the group stage for the first time since 2007. Hants vs Middlesex scorecard

A game-defining over from Imad Wasim ensured that Nottinghamshire Outlaws defeated Durham in their meeting at Trent Bridge to finish at the top of the North Group.

Wasim took 2-24 but also executed a couple of run outs as Durham fell short of a victory target of 151 to lose by 18 runs.

Notts scored 150-7 after being asked to bat first, with Ben Duckett top-scoring with 29. Paul Coughlin and Liam Trevaskis each took two wickets for the visitors as the normally free-scoring home side were kept in check.

The result means that Notts finish the qualifying matches as the number one seed and will play Leicestershire Foxes at home in the quarter finals. Durham’s loss ended their slim hopes of advancing to the next stage and means their season is now over. Notts vs Durham scorecard

Joe Root and Harry Brook led Yorkshire Vikings to a dramatic six-wicket victory off the final ball against the Derbyshire Falcons.

Root scored an unbeaten 60 from 50 balls while Brook smashed 50 off 29 to take the Vikings to their target of 168 at Headingley and end a run of four straight T20 defeats.

They looked to be heading for another disappointment when Sam Conners removed Adam Lyth and Dawid Malan in the third over, and were well off the pace at 80-4, but Root and Brook shared an unbroken stand of 91 to overhaul the Falcons’ 167-6. Derbyshire vs Yorkshire scorecard

Douthwaite smashed three of the opening four balls from the England T20I bowler over the ropes to see his side to their 191 victory target with two balls to spare.

His hitting upstaged a splendid century by Worcestershire opener Hamish Rutherford in the final game of his third spell with the county.

The New Zealand opener hit four sixes and 11 fours in making exactly 100 from 62 balls in a brilliant display of hitting.

Rutherford received excellent support from Jake Libby in a dazzling second-wicket partnership of 101 in nine overs as the Rapids totalled an impressive 190-3. Worcs vs Glamorgan scorecard