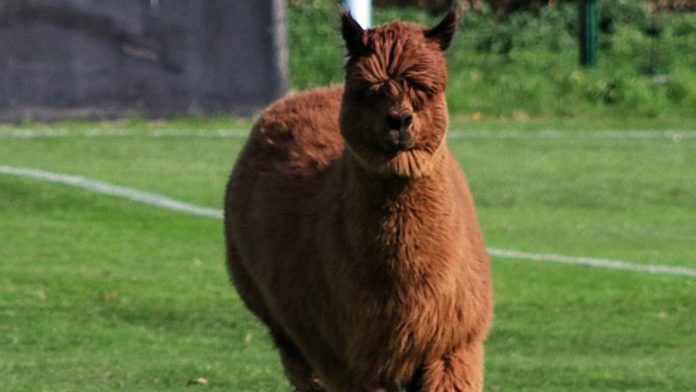 A football match in West Yorkshire was forced to stop for around 20 minutes after an alpaca invaded the pitch.

Oscar apparently galloped into the game between Carlton Athletic and Ilkley Town on Saturday from a nearby farm, and footage of what happened has gone viral.

Claire Armstrong, Ilkley’s COVID-19 officer and wife of the first-team coach, filmed the invasion on her phone, according to club chairman Richard Giles.

He said: “Claire was on a call with someone and said ‘I’m so sorry, I’ve got to put the phone down, there’s an alpaca on the pitch’.”

The animal appeared five minutes before half-time and brushed off attempts to usher it off the pitch for so long that players were left feeling cold by the time play resumed.

“I’ve been watching football and playing football 40 years and never seen anything like this,” added Mr Giles.

Despite the delay, Ilkley, who play in the seventh tier of English football, went on to win the game in Wakefield 2-0 with goals from Tom Fleming and Joe Chilaka.

The club hopes to achieve promotion to semi-professional status this season after narrowly missing out on a step up last year.

With Oscar proving a lucky charm for the club, the chairman said they are now considering recruiting an alpaca as a mascot to spur the team on.

“There’s a farm closer to where we are that we plan to get in touch with,” continued Mr Giles.

However, according to Carlton fan Gavin Shoesmith, the allegiances of Oscar himself lie elsewhere.

“Oscar the alpaca is an avid Carlton fan and often is spotted engrossed in the games on a Saturday,” said the 46-year-old, who was at the game.

“This week he’d had enough after a shocking first half by the referee and decided he was having none of it and vaulted the fence.”