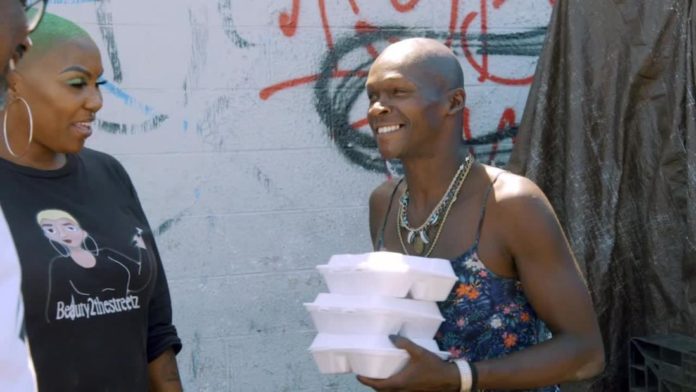 “Hey Q-Q!” Shirley Raines calls out. Colorful flowers, potted plants and a “Home Sweet Home” sign adorn the entrance to Q’s home.
For more than 20 years, Q has lived on the fringes of Los Angeles’ Skid Row, one of the nation’s largest concentrations of homeless people, where tents line entire city blocks. She and Raines were recently featured on CNN’s “United Shades of America with W. Kamau Bell.”
Q, who is transgender and HIV positive, says in the episode that she felt vulnerable living in the main part of Skid Row.
“This zone is, to me, much more nicer,” Q says. “It is a lot safer for me.”
Raines operates Beauty 2 The Streetz, a non-profit that provides haircuts, makeovers and food to Skid Row residents. She’s been helping take care of Q for the past four years.
Raines says Skid Row’s main area can be “very territorial,” so that’s why Q and other members of the gay and transgender community live a few blocks away.
“If you can’t protect and defend yourself, you don’t go to the Row,” says Raines. “You stay back here.”
Despite the challenges she faces, Q maintains a positive outlook.
“I love life. I love just the smell of nature, the flowers, plants,” she says. “This is a world too. We might not have the luxury things that they have down there, but we’re human just like they are.”
A couple of weeks after the “United Shades of America” episode aired on CNN, Raines revealed some happy news about her friend: Q’s family spotted her on the show and brought her home.
“She’s back home, acclimating well,” Raines told CNN this week.
Raines said it had been 26 years since Q had seen her family, and while some of the homeless men and women she’s worked with have gotten off the streets, very few reunite with their relatives.
“She’s sleeping in a bed, eating at a table, living the life that everyone deserves to live,” Raines said. “She’s got ‘miracle’ written all over her.”