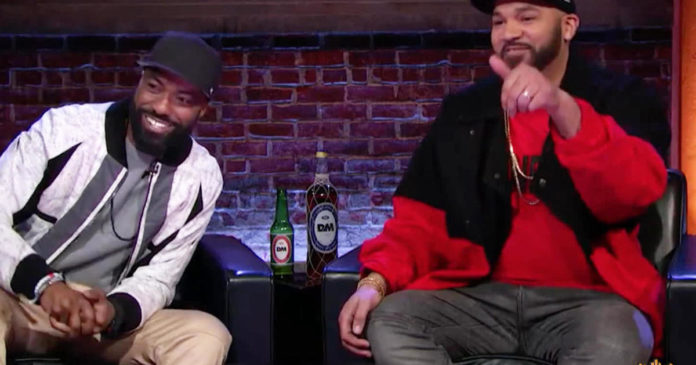 Never in the history of television has a late-night talk show sounded or looked like “Desus & Mero.”

Daniel Baker, known as Desus Nice, and Joel Martinez, a.k.a. The Kid Mero, both from the Bronx, New York, team up twice a week on Showtime (a ViacomCBS company). Between sips of adult beverages – while on the air! – Desus & Mero, as The New Yorker put it, have conquered comedy.

Right before the pandemic, the two met with correspondent Maurice DuBois at a bar & grill near the old neighborhood.

Drinks? “Yeah, sure, why not?” said Desus. “We’re celebrating. We made it to CBS! Hooray. Doing big things for the Bronx!”

“When you hear the phrase ‘late-night talk show,’ you’re expecting guy in suit, monologue, very formulaic,” said Mero. “So, with us it was just, like, ‘Okay, like, we’re gonna do what we wanna do and forget, like, the blueprint that’s already there. Like, we’ll just make our own.'”

Just signed to their third season, Desus & Mero offer their different take on pop culture, music, sports, politics (debating with presidential nominee Joe Biden about the best flavor of Gatorade), or whatever comes to their collective minds.

Mero described their show: “It’s an informed hangout session with your friends, where you discuss the day’s events, you know what I mean? In a nutshell.”

“To put it concisely, the barbershop with slightly more facts!”

Desus & Mero have broken the late-night talk show mold by serving up comedy their own way, with big chunks of comedy that cannot be shown on “Sunday Morning.” At times, and without apologies, they use the N-word, as when they postulated that “Peanuts” characters Charlie Brown and Franklin, who look exactly alike, shared the same father.

Desus said, “If we weren’t on TV, sorry, the N-word is the way we talk in the barbershop. When I see my boy on the block, we use the N-word. It makes you uncomfortable? That’s our everyday life. We grew up in a world where that word was common. And that’s how we talk.”

Dubois asked, “So, there are those who will look at it and see you demeaning yourself or demeaning the whole race. What do you say to them?”

“Nah, I don’t see that at all,” said Mero. “Because the problem is, we’ve reclaimed the word. And by me using this word, I’m taking away the power the word has.”

“Does ViacomCBS ever get into about what you’re talking about on the air?” asked DuBois. “Do they have limits? You know, you ever hear, ‘Hey, the bosses didn’t like that, you guys pushed it a little too far’?”

Full disclosure: every now and then, they’ll use clips from DuBois’ newscast on WCBS in New York. “We have people in other countries who know who Maurice DuBois is!” Desus laughed.

But mostly, their guests are A-list, such as Dr. Anthony Fauci, who was asked, “Under six administrations, who has been the coolest president that you have worked with?”

“Well, there’s not a chance in the world that I’m gonna answer that one!” Fauci laughed.

Desus and Mero met when they were young and in summer school in the Bronx. Mero, whose family is from the Dominican Republic, now lives in New Jersey with his wife and four kids. Desus, whose parents are from Jamaica, still lives in the Bronx – and, until COVID-19, still visited his favorite bodega.

In the late 2000s, they started gathering fans who followed their early Twitter conversations, then their “Bodega Boys” podcast, and their Viceland TV series.

Now, they’re in a league of their own.

The proof of that success? When David Letterman appeared on the show last season.

Desus asked Letterman, “How much do you know about us?”

“I know quite a lot about the two of you,” he replied. “I feel like I’m with my friends.”

Mero told DuBois, “That’s like Michael Jordan telling you you’re good at basketball. Him turning to us and saying, ‘This is what late-night should be,’ was just like stamp of approval.”

The icing on this cake may be the release of their new book, titled “God-Level Knowledge Darts,” basically Desus & Mero’s take on dating, drugs, kids, cops and food.

Such as Desus’ beef about beef: “The proper way to eat steak is fast. I recommend black and blue. A couple of seconds on each side. You know what i’m saying? You wanna hear that cow’s still moving when you put it on the plate. Anything else, that’s disrespectful to the calf. You know what I mean?”

For their fans around the world, Desus Nice and The Kid Mero are making rare comedy that’s well-done.

DuBois asked, “It feels like the world is coming apart to a lotta people. What do you feel your role is when it comes to that?”

Desus added, “When we talk to people, they’re just like: ‘Your show is getting us through this pandemic. We watched you guys. And it takes my mind off everything for just half an hour. And that’s what’s getting me through this.’ You know, it’s a good role to have.”