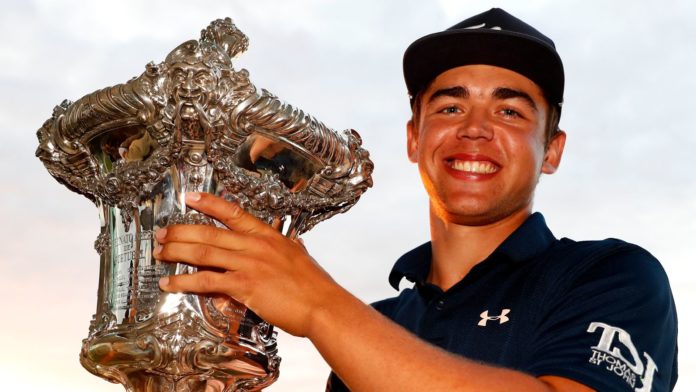 The South African came back early on Sunday morning to close out a third-round 66 at Royal Óbidos Spa & Golf Resort, with the tournament playing catch-up due to thunderstorms and strong winds causing disruption earlier in the week.

Higgo then posted seven birdies in a blemish-free final-round 65 to end the week on 19 under, picking up a shot at the par-five last to hold off the challenge of Spaniard Pep Angles.

“It feels awesome,” Higgo said. “I thought it was going to be a little bit easier over the last three holes but he [Pep Angles] made it a bit tough. That birdie on the last was really, really nice.”

Starting the final round a shot behind home favourite Vitor Lopez, Higgo followed an opening-hole gain by firing four birdies in a five-hole stretch from the fourth to reach the turn in 31.

Higgo took advantage of the par-five 11th and chipped in from off the 15th green to save par to stay three ahead with three holes to play, as Angles followed a front-nine 33 by cancelling out a bogey at the 11th with a birdie at the par-four next.

Angles posted back-to-back birdies from the 16th to close the gap to a shot heading to the par-five last, where Higgo matched the Spaniard’s closing birdie to claim victory in just his seventh European Tour start.

George Coetzee – the highest-ranked player in the field – carded a bogey-free 66 to share third spot with England’s Andrew Wilson, with Jens Dantorp a further shot back in tied-fifth with Carlos Pigem.

Lopes birdied the last to close a level-par 72 and finish tied-seventh with Jonathan Thomson – who equalled the lowest round of the day with a bogey-free 64 – with Maverick Antcliff and England’s Jordan Wrisdale rounding off the top-10.

The European Tour now heads back to Britain for the second ‘UK Swing’ of the season, with the Dubai Duty Free Irish Open getting underway at Galgorm Castle on Thursday and marking the first of four consecutive UK-based events.