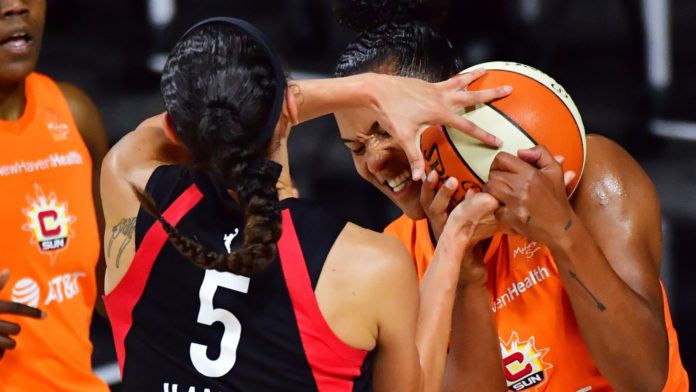 Jasmine Thomas had a career-high 31 points and Alyssa Thomas added 18 as the Connecticut Sun pulled away early and cruised to an 87-62 win over the Las Vegas Aces in Game of 1 of the best-of-five WNBA semi-final series on Sunday.

Alyssa Thomas had six rebounds, five assists, five steals and two blocks. Natisha Hiedeman made 4-of-4 from three-point range and finished with 14 points for Connecticut.

The seventh-seeded Sun lost their first five games of the regular season but rebounded to make the playoffs. They beat No 6 seed Chicago Sky and third-seeded Los Angeles Sparks in the first two rounds of the postseason.

Game 2 is scheduled for the early hours of Wednesday morning.

After receiving inconclusive coronavirus test results on Sunday for players from the Storm, the WNBA announced that Game 1 of Seattle’s semi-final series with the the Minnesota Lynx had been postponed out of an abundance of caution

Players with inconclusive results have undergone additional testing and are currently in isolation. The new date for Game 1 will be communicated as developments dictate.

Want to watch even more of the WNBA but don’t have Sky Sports? Get the Sky Sports Action and Arena pack, click here.