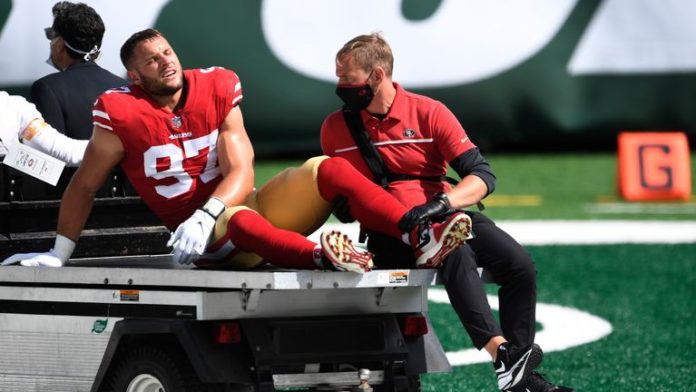 NFL Network Insider Ian Rapoport reported that Barkley will have an MRI, but the belief is he will be out for the season.

Barkley was injured on the first play of the second quarter. He ripped off his helmet, writhing in pain, grabbing at his right knee after a six-yard run. Team-mates helped Barkley across to the field to the Giants bench and he punched the cart that drove him off the field. Two plays earlier, Barkley was shaken up after taking a shot on an 18-yard scamper.

Injuries wreaked havoc generally around the NFL on Sunday night, with San Francisco 49ers suffering four of them as they rallied to beat the New York Jets 31-13.

Coach Kyle Shanahan told reporters after the game that 2019 defensive rookie of the year Nick Bosa and fellow defensive end Solomon Thomas both likely have ACL tears, while quarterback Jimmy Garoppolo (ankle) and running back Raheem Mostert (knee) both sat out the second half with injuries.

McCaffrey exited early with an ankle injury, Adams came out of the second half with a hamstring injury, while Lock suffered a right shoulder injury in the first half and did not return.