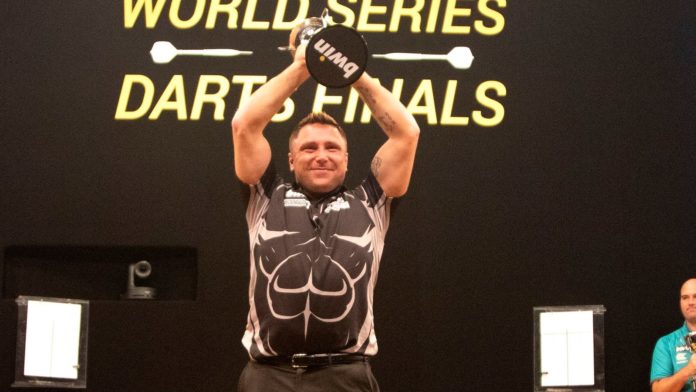 Gerwyn Price beat Rob Cross on an epic final day to claim the third major televised title of his career with victory at the World Series of Darts Finals in Salzburg.

Two-time Grand Slam champion Price produced a brilliant burst to the finish line, rallying from 8-4 down to win seven of the last eight legs for a thrilling 11-9 win over a resurgent Voltage having earlier beaten Nathan Aspinall and Peter Wright on Finals Day.

With little between the players in the early exchanges it was Cross, who had fired a brilliant 144 finish to start the match, who seized the initiative to move four clear after the first interval. But Price is a tough and seasoned competitor in the latter stages of competitions and when he levelled the match at 9-9 there looked to be one winner.

The world No 3 claimed the 19th leg to stand within one of the title and when Cross missed a dart at double 18 for an 11 finish and a last-leg decider, Price was on hand to pin double top for another memorable title.

Price extended his winning run to 17 matches having won the last two Autumn Series events at the five-day Players Championship in Germany earlier this week.

Former world No 1 Colin Lloyd leads the way every fortnight for all the latest news, interviews and reaction

Price had begun his campaign on Saturday night with a win over Vincent van der Voort and after edging a classic against Aspinall in a last leg shoot-out to kick off Sunday, he went on to sink the world champion with a brilliant performance.

The Iceman defied a remarkable 108 average from Snakebite to win 10-6 and seal his final date with Cross, who put his recent indifferent form behind him to reach yet another final.

The 2018 world champion has added a European Championship and a World Matchplay to his Alexandra Palace title but the last 18 months have also seen a number of early exits and some inconsistent form on the Pro Tour.

But a 6-0 whitewash against Steve Beaton got his campaign in Austria off to the perfect start on Saturday and he followed up with a 10-8 win over last year’s runner-up Michael Smith before beating former champion James Wade to reach the final.

Both men had missed out on making the top four in the Premier League, after early exits at the World Matchplay, but they served up a cracking contest at the end of three days of action that also saw the return of fans to PDC events.

More than 1,000 fans attending each day, the first event since the Premier League in Liverpool in March to have fans watching the action and it was perhaps fitting that Price prevailed.

The Welshman has admitted that he needs the crowd’s energy to get him going, and his roars across the final were testament to that as he sealed the £70,000 first prize and underlined his status as one of the world’s best.

The darting action continues in Europe this week with the players set for the German Darts Championship which gets underway on Friday. The action represents the last chance to make the field for the World Grand Prix, the next big TV tournament which will be held at Coventry’s Ricoh Arena rather than Dublin’s Citywest Hotel.