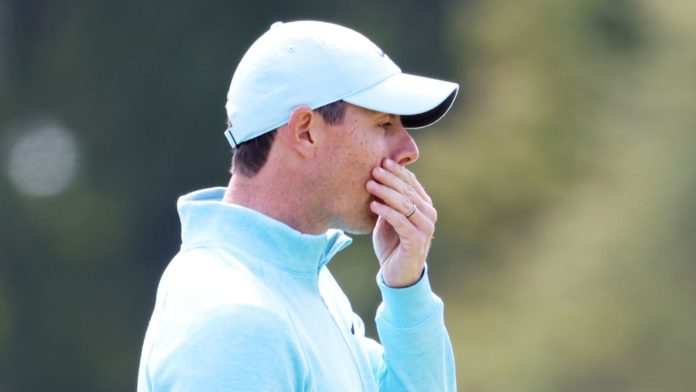 “I think it’s brilliant, but I think he’s taken advantage of where the game is at the minute”

Rory McIlroy expressed his surprise at the manner of Bryson DeChambeau’s US Open victory after his own challenge petered out on the final day at Winged Foot.

McIlroy’s bid to put early pressure on the leaders came undone with a horrible six at the first, and he would go on to close with a 75 to finish 12 strokes behind the champion, having started the day six behind and full of optimism.

It was imperative that McIlroy kept the mistakes at bay over the early stages of his round, and the signs looked good when he found the fairway with his opening drive. But a poor second with short-iron in hand did not make the desired plateau on the green and rolled back to the fringe, some 90 feet from the flag.

His first putt lacked enough pace and again ended up at the front of the green, from where he needed three more to get down for a damaging double-bogey six.

Final round as it happened

McIlroy scrambled a par at the third, but a miss from inside six feet at the next cost him another shot, and a bogey on the short seventh left him playing for pride over the remainder of the day.

And he did a good job of that initially, making welcome birdies at the ninth and 11th, but missing the fairway at 15 cost him a shot and another wayward drive at the next led to another double-bogey.

As he contemplated another major gone by without adding to his tally of four, McIlroy hailed DeChambeau’s performance as “pretty impressive” but admitted he did not envisage anyone powering to the title when hitting only 23 fairways over the week – the lowest of any US Open winner in history.

“I don’t really know what to say because that’s just the complete opposite of what you think a US Open champion does,” said McIlroy, the 2011 champion. “Look, he’s found a way to do it.

“Whether that’s good or bad for the game, I don’t know, but it’s just not the way I saw this golf course being played or this tournament being played. It’s kind of hard to really wrap my head around it.

“I played with Bryson at Colonial the first week back out, but I sort of said, ‘okay, wait until he gets to a proper golf course, he’ll have to rein it back in’. This is as proper a golf course as they come, and look what’s happened. But, he’s got full belief in what he’s doing, and it’s pretty impressive.”

McIlroy also sounded a note of caution ahead of The Masters in November, hinting that DeChambeau’s remarkable power and aggression could see him as a runaway winner at Augusta National.

“I don’t shudder to think about it, but if he can do it around here, I’m thinking of Augusta and thinking of the way you play there.

“I stood up here a few weeks ago and said the game has moved on a lot in the last 14 years since the US Open was last played here, and you’re seeing what the game has become, what he’s doing out there.

“I think it’s brilliant, but I think he’s taken advantage of where the game is at the minute. Whether that’s good or bad, it’s just the way it is. With the way he approaches it, with the arm-lock putting, with everything, it’s just where the game’s at right now.

“I’m not saying that’s right or wrong. He’s just taking advantage of what we have right now.”