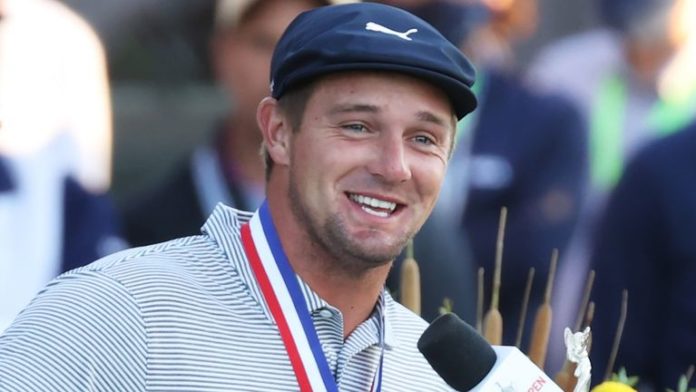 “I think I’m definitely changing the way people think about the game. Now, whether you can do it, that’s a whole different situation”

New US Open champion Bryson DeChambeau is adamant that his power-based approach to golf will attract a new generation of youngsters to the sport.

DeChambeau’s strategy of prioritising length over accuracy at Winged Foot paid off as he stormed to a six-shot victory over third-round leader Matthew Wolff, closing with a three-under 67 for a winning score of six under par.

The 27-year-old was the only player to complete 72 holes under par, and the only man to break 70 on a tough final day using tactics that many, including Rory McIlroy, thought impossible to succeed on the notoriously tough New York layout.

But DeChambeau proved otherwise despite hitting only 23 fairways over the championship, and he insisted his bold and powerful game would appeal to the next wave of potential golfers.

“I hope I can inspire some people,” he said after collecting his first major title. “My goal in playing golf and playing this game is to try and figure out this very complex, multivariable game, and multidimensional game as well. It’s very, very difficult, but it’s a fun journey for me.

“I hope that inspires people to say, ‘hey, look, maybe there is a different way to do it’. Not everybody has to do it my way, I’m not saying that. I’m just saying in general that there are different ways to do things. If you can find your own way, find your passion, like when Arnie said ‘swing your swing’.

“Hopefully, my way inspires people. This is my seventh win on the PGA Tour, my first major, and I couldn’t be more proud. I hope that it does inspire a few people.

“I think I’m definitely changing the way people think about the game. Now, whether you can do it, that’s a whole different situation. There are a lot of people that are going to be hitting it far, like Matthew was hitting it plenty far today.

“A couple of putts just didn’t go in for him today and kept the momentum on my side. So he’s definitely got the firepower and the strength to do it. You’ve got to be looking out for him in the future.

“There’s a lot of young guns that are unbelievable players, and I think the next generation that’s coming up into golf hopefully will see this and go, hey, I can do that too.”

DeChambeau also claimed that his ‘creativity’ around the greens contributed to his victory just as much as his awesome length, although he conceded that the extra power he has over the majority of the field was a huge advantage.

“I think I’ve got a lot of creativity,” he added. “Phil said it to me earlier this week. He said that in 2006 he had the best short game week of his life, and that really stuck out to me for some reason because I just knew that, if I did hit it in the rough, I’m going to have to get it up and down quite a bit.

“So I made sure that I needed to practice those shots coming into the week, and I did that beautifully, and I felt super comfortable out of the rough no matter the situation.