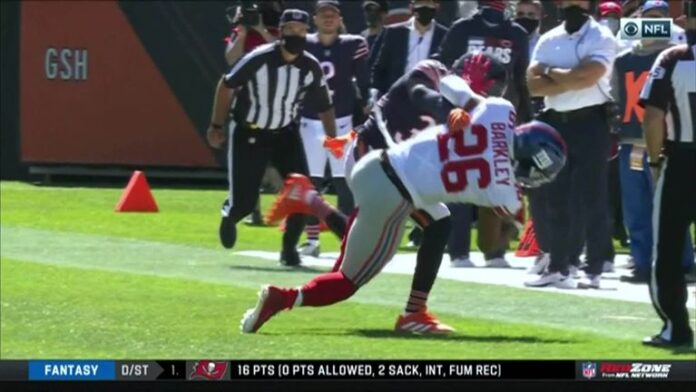 The Seattle Seahawks made a defensive stand at the goalline on the final play of the game to defeat the New England Patriots 35-30 in a Sunday Night Football thriller.

Cam Newton nearly rallied the Patriots from a 12-point deficit in the final four and a half minutes as he scored a second rushing touchdown of the game with two minutes and 16 seconds left.

After a Seattle three-and-out on their next series, New England drove all the way down to the one-yard line with two seconds left, but this time Newton was stuffed at the goalline by Seattle’s L.J. Collier for a one-yard loss.

Russell Wilson was otherwise the star of the game, throwing five touchdown passes to five different receivers, following on from his four in Week One as he makes an early claim for the season MVP award.

DK Metcalf, Tyler Lockett, David Moore, Freddie Swain and Chris Carson all had touchdown receptions for the Seahawks, who outscored New England 14-3 in the third quarter to pull away from a 14-all half-time tie.

Newton, meanwhile, completed 30 of 44 passes for 397 yards and a touchdown, an was typically effective on the ground too, rushing for a team-high 47 yards rushing and two scores. Julian Edelman failed to find the endzone, but was Newton’s favourite target, tallying eight catches for 179 yards.

The Patriots had opened the scoring on the night as a Wilson pass intended for Greg Olsen deflected off the tight end’s hands and went straight to Devin McCourty, who returned it 43 yards for a touchdown.

Seattle responded with a 13-play, 75-yard drive capped by a four-yard touchdown pass from Wilson to Lockett. The Patriots then regained the lead with a goal-line run from Newton early in the second quarter, only for a beautiful deep ball from Wilson to Metcalf to result in a 54-yard TD to tie the game up at the half.

New England took a 17-14 lead on a 25-yard field goal by Nick Folk early in the third, but Seattle appeared to be pulling away when Wilson found Moore (38 yards) and Swain (21 yards) for further touchdowns and a 28-17 lead.

Newton picked out Jakob Johnson for a one-yard TD early in the fourth quarter but the Pats QB failed on the two-point try to follow. When Wilson connected with Carson for his fifth TD, Seattle moved 12 points clear, only for Newton to take the game right down to the wire.

Earlier in the game, Seahawks defensive back Quandre Diggs was ejected for a helmet-to-helmet hit on Patriots receiver N’Keal Harry in the first quarter.

Injuries wreaked havoc generally around the NFL, with San Francisco 49ers suffering four of them as they rallied to beat the New York Jets 31-13, while Carolina Panthers running back Christian McCaffrey, Green Bay Packers receiver Davante Adams and Denver Broncos quarterback Drew Lock, among others, also went down..

49ers coach Kyle Shanahan told reporters after the game that 2019 defensive rookie of the year Nick Bosa and fellow defensive end Solomon Thomas both likely have ACL tears, while quarterback Jimmy Garoppolo (ankle) and running back Raheem Mostert (knee) both sat out the second half with injuries.

Lamar Jackson threw a touchdown pass, Mark Ingram II rushed in for a score and the Baltimore Ravens racked up 230 total yards of rushing as they beat the Houston Texans 33-16.

L.J. Fort added a fumble return for a touchdown and Justin Tucker kicked four field goals as the Ravens (2-0) led throughout and were never truly tested except for when the Texans (0-2) pulled to within three at 10-7 in the second quarter after a Deshaun Watson 10-yard touchdown pass to Darren Fells.

Baltimore outrushed Houston 230 yards to 51, with the Texans picking up just two rushing first downs. Watson, meanwhile, completed 25 of 36 for 275 yards, a touchdown and an interception.