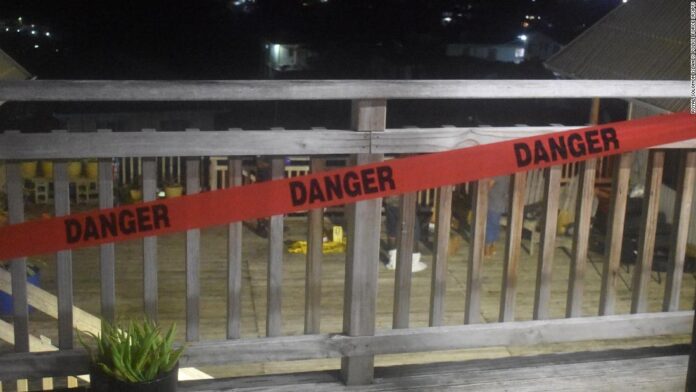 The fatal incident occurred in the residential Tasahe area of the Pacific Island’s capital Honiara on Sunday evening local time, the Royal Solomon Islands Police Force (RSIPF) said in a statement.
The Norwegian People’s Aid (NPA) confirmed that two of its employees had died in an explosion and identified the men as British national Stephen “Luke” Atkinson and Australian citizen Trent Lee.
“This is a tragic accident. So far, we know that there has been an explosion with fatal consequences,” NPA said in a statement. “Our main priority now is to offer assistance to relatives and colleagues, and to clarify what has happened.”
The charity is working with the Solomon Islands police force’s bomb disposal team to develop a database mapping unexploded ordnance from the Second World War.
The Solomon Islands was the site of major military campaign for the Pacific, and its islands are littered with thousands of unexploded bombs left over from the conflict.
Police said officials at the National Referral Hospital in Honiara confirmed that two foreign nationals died as a result of the blast.
The NPA, which operates in 19 countries around the world, said it has temporarily halted its activities on the Solomon Islands and is working with the police investigation.
“We are devastated by what has happened, and for the loss of two good colleagues. Our thoughts and deepest condolences go out to their families, relatives and staff,” said NPA’s Secretary General Henriette Killi Westhrin.

In an updated statement on Monday, Inspector Clifford Tunuki, the officer-in-charge (OIC) of the bomb disposal unit (EOD) said the explosion happened at the residence of the NPA.
While police do not know what caused the blast, Tunuki said preliminary investigations “indicate they had several items of UXO (unexploded ordnance) at the residence and they may have been conducting some UXO work.”
“We are concerned that they decided to conduct EOD operations within a residential area,” he said. “RSIPF did not know these items had been moved to the NPA residence.”
Other unexploded ordnance discovered at the residence were moved to a safer area, the inspector said.
Police are waiting on forensic results and “a number of police units are now involved in the investigation including Forensics, Explosive Ordnance Disposal (EOD) and the Serious Crime Unit.”
Earlier, police said none of its bomb disposal officers were at the scene when the explosion happened.
The survey team, which the two men were part of, confirms the location of unexploded bombs following reports from the local community. They relay that information to the police, who then determine what to do with the bombs, Tunuki said.
“On behalf of the RSIPF I wish to convey my sincere condolences to family and relatives of those two foreign nationals who died in this tragic incident,” Tunuki said.

The NPA said that the Solomon Islands remain heavily contaminated by explosive remnants of war and munitions continue to kill or seriously injure local people.
Guadalcanal, the island which is home to the capital Honiara, was site of one the most significant battles of World War II in the Pacific.
US Marines attacked Japanese forces on the island in 1942 in a campaign that resulted the first major allied land victory over Japan and a turning point of the war.
Almost 1,600 Americans and almost 15,000 Japanese were killed on Guadalcanal, according to the US military history of the battle.
“Explosive Weapons are often found within city construction sites, coral reefs, farms, forests and suburban gardens where children sometimes find and play with them,” the charity said on its website.