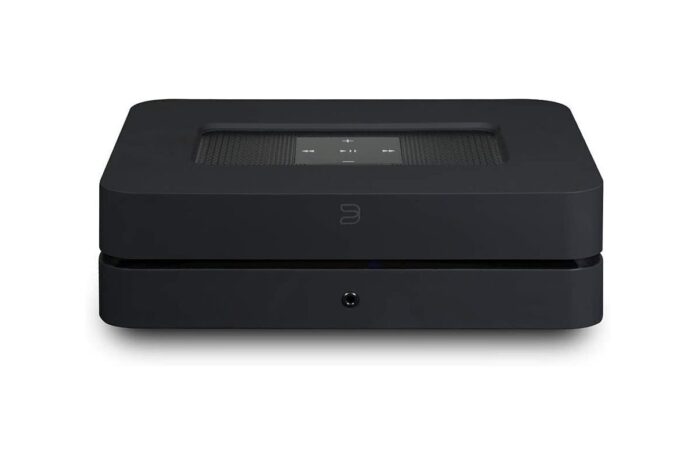 Don’t let the petite dimensions and minimalist design of the $899 Bluesound Powernode 2i deceive you. This self-amplified, multi-room streaming music player is packed with audio goodness and will deliver blissful sonic experiences from nearly any source: Local or network storage, a disc player, your mobile device, or your streaming service of choice—including their high-res tiers. You can use a turntable, too, but you’ll need to plug it into a preamp, first. Just be prepared for a user experience that’s, shall we say, a wee bit rough around the edges.

In my book, the Powernode 2i’s features, capabilities, and performance are worth dealing with a few operational quirks that must be mastered, tolerated, or fixed (more on that in a bit). Its pluses far outweigh its negatives, just like that abiding love of your life whose eccentricities you learn to ignore. I mean, what’s not to love here? You get whistle-clean amplification (60 watts per channel), high-resolution audio support (up to 24-bit resolution with sampling rates as high as 192kHz), support for every important file format (including FLAC, Apple Lossless, and MQA), robust connectivity options (USB, gigabit ethernet, dual-band 802.11ac, Airplay 2, two-way Bluetooth 5.0), diverse inputs and outputs (Toslink, combo Toslink/3.5mm in; 3.5mm headphone, subwoofer out), and even HDMI ARC support. Just add your own loudspeakers.

Unique in this product category, the Powernode 2i can also stream music to your favorite Bluetooth headphones—with support for the aptX HD codec and remote transport control (pause/play, volume up/down) if your cans also have those features. Prefer old-school wired headphones? Just plug them into the 3.5mm jack on the front of the unit. I got my groove on with Andover Audio’s PM-50 planar magnetics (newly updated with the larger-cavity ear cups I’d been asking for).

It’s hard to believe the amount of tech packed into this 3.8-pound chunk of a thing measuring just 8.7 x 7.5 x 2.75 inches (WxDxH). It even has touch-sensitive controls on its top surface (play/pause, volume up/down, previous/next track), or you can manage it with your mobile device (Android or iOS), voice commands (Amazon Alexa or Google Assistant), or Bluesound’s RC1 Remote Controller (a $59 add-on). It doesn’t sip much juice, either: 2.3 watts in standby and hovering around 13 watts during operation, according to my Belkin energy monitor.

The Powernode 2i is the first (and still only) integrated streaming tuner/amp combo I’ve encountered in this price range that can deliver the high-resolution tiers of Qobuz, Tidal HiFi (including MQA), and Amazon Music HD. Bluesound supports just about every other service, too, including Spotify, Deezer, iHeartRadio, Neil Young Archives, Nugs.net, TuneIn, and more. Curiously, however, Apple Music, Pandora, and Sirius/XM are not currently supported (unless you stream them from your mobile device over Bluetooth). You can also use the Powernode 2i with what just might be the world’s best music-listening software: Roon—if you don’t mind paying $120 a year or $700 for a lifetime license.

Bluesound’s competition doesn’t measure up in terms of support for high-resolution audio. Sonos delivers an unparalleled user experience, and it supports almost every streaming service under the sun, but even its latest-generation S2 components are limited to sampling rates up to 48kHz (albeit with 24-bit resolution), and that’s only with FLAC and Apple Lossless tracks. Older Sonos components are limited to 16-bit/48kHz.

Bose isn’t nearly as open to streaming services—it doesn’t offer Tidal or Qobuz—and CD resolution is as good as it gets from any source with its two lines of networked audio gear, Smart Speakers and SoundTouch. Russound offers Hi-Res-certified audio streamers, but neither the MBX-PRE I reviewed in July nor its amplified sibling, the MBX-AMP, can handle 24-bit FLAC files. Russound supports Tidal, but not Tidal HiFi, Qobuz, or Amazon HD.

The Powernode 2i’s detailed, airy, and full bodied sound will impress even sonic snobs who limit their listening to pristine 18-gram vinyl pressings, SACDs, Blu-Ray Audio, and DVD-Audio discs. I performed a series of A/B comparisons of high-res tracks streamed from Qobuz and Tidal HiFi with the same tracks played from CDs on Oppo and Pioneer universal players connected to the Powernode 2i. I selected tracks recorded by well-known studio perfectionists: Dire Straits, Jackson Browne, Norah Jones, Donald Fagen, and Stevie Wonder. I used a pair of Q Acoustics’ 3020i bookshelf speakers (deliciously affordable at $329) and a vintage MB Quart subwoofer to round out the bottom.

I had difficulty discerning which was the “hard copy” and which the stream. And sometimes the latter won the race. As a discerning (okay, obsessive) listener, I can’t tell you how comforting it is to finally hear streaming music that’s uncompromised. Recordings that replicate the original masters, rather than seeming one step removed from reality; that sound veiled—not quite as sharp-edged and focused, with a tad less forcefulness and curve in the bass notes, less bite in the brass.

Norah Jones’ classic “Come Away With Me” was full of Technicolor, 3D moments in the 24-bit, 192kHz treatment from Qobuz. Annother odd but telling treat was hearing cricket-like tape-recorder sounds chirping in the background on Jackson Browne’s mixed hotel-room/concert-stage recording of “The Road,” from his musical verité-styled Running on Empty. I never heard those tape reels spinning on the original vinyl pressing.

On the fresh-baked music front, I felt like I was sitting in the front row listening to Chick Corea’s new Plays solo concert mash-up of famous jazz and classical airs; likewise with the sunny, spirit-lifting, gospel/soul/jazz fusion of Gregory Porter’s All Rise. And I gladly took a deep gut punch from Public Enemy’s slamming Fight the Power: Remix 2020.

Don’t let my warning about the Powernode 2i’s learning curve scare you away from considering this device. BluOS has evolved over the years and continues to improve. Its current menu structure, with its large album art, is best in class. On the other hand, I have a major gripe with the way Bluesound expects you to navigate its BluOS Controller app.

Diving into the core music-streaming services is easy enough, but performing some other tasks can be confusing and tedious. It takes way too many taps, for example, just to set up a station list or playlist as one the 40 available presets. I’d much prefer a simple “tap the heart symbol to save your favorite.”

Bluesound touts Alexa and Google Assistant compatibility, but you’ll need to memorize highly specific phrases to call up one of the 40 presets you programmed. You can’t just say “Play Beyoncé,” for instance, you need to say “Alexa, ask Blue Voice to play preset four on Living Room” (or whatever name you’ve assigned the Powernode 2i). Hardcore smart-home dwellers, meanwhile, will appreciate the system integrations the Powernode 2i offers, including Control4, Crestron, Elan, and Lutron.

Audio settings are another head scratcher. A bunch intended for EQ are basically useless, and another one is entirely counterintuitive: Plug in a powered subwoofer, as I did, and you’ll need to navigate to “Select Attached Speakers” in the app. Once there, you’ll tap a button labeled “No Subwoofer.” This activates a crossover to route frequencies below 80Hz from the stereo speakers to the subwoofer out. If you don’t have a sub, you’ll need to make sure that the “With Subwoofer” icon is glowing. Got it? Took me a while.

The Powernode 2i also reacts poorly to network outages. Even short breaks caused it to lose its connection to my Xfinity XB7 gateway, which meant I could no longer control the player via Android, iOS, or Windows until I rebooted everything.

Happily, there is an easy fix for this. Go into your router’s user interface (or ask Bluesound’s tech-support team to do it for you) and reserve the IP address assigned to the Powernode 2i. That change made a world of difference for me, changing my outlook from “Enough already!” to “I could happily live with this.” The apps on my Lenovo laptop, iMac desktop, Samsung Galaxy Note 8, and iPad now all run smooth and super quick. I’m still encountering the occasional app lockup on my iPhone X, but Bluesound told me “we’re looking into it. We’re never finished tweaking this product.”

I had hoped that the Powernode 2i would use HDMI to display album art on my TV, but it doesn’t. Its sole purpose is to play audio coming in from your TV. And it does that perfectly fine.

The Powernode 2i is for music lovers who care deeply about audio quality and are willing to suffer with a few quirks and a less-than-stellar user interface to get it. Most of its shortcomings are software related and therefore fixable. There’s no guarantee that will ever happen, though, so don’t buy one if usability trumps musicality in your book. Check out Sonos’ offerings, instead, just know that you won’t get high-res audio that way.

Bluesound packs a lot of value into this device, but if you already have an amplifier you like, it also offers the passive Bluesound Node 2i at $549. It has all the same features less the amplifier and HDMI. We’ll have a review of that model soon.

How to properly log your devices out of iCloud