Home World I hate to say it, but Ferrari’s new convertible is worth every... 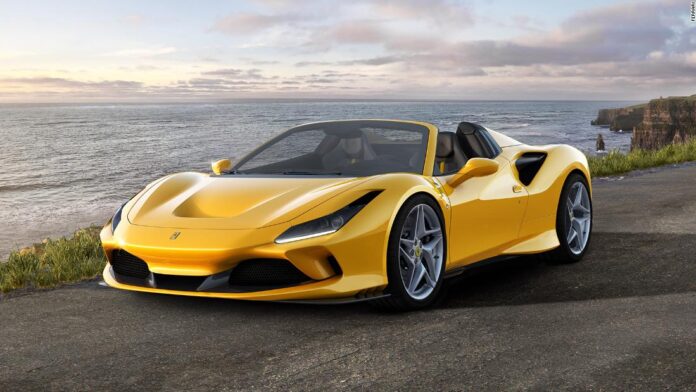 I almost hate to say this because Ferrari, as a company, is so irritatingly aware of its own specialness. Even company earnings calls are filled with references to the brand’s hallowed status. Ferrari, just the seven letters, is one of the most highly valued brand names in the world. The stock price has tripled in value since the company was spun off from Fiat Chrysler Automobiles in 2015.
Then, of course, there are the cars themselves. The most valuable classic car ever sold at auction was a 1962 Ferrari 250 GTO that sold for more than $48 million in 2018. Of the top ten most valuable cars ever sold at auction, six are Ferraris.
That’s some serious brand equity and you don’t get that by being average.
I was able to experience this firsthand when I pressed the Engine Start button on Ferrari’s newest convertible, the F8 Spider. Lots of cars have Engine Start buttons these days, but Ferrari’s is on the steering wheel — as if no time can be wasted moving your hand to get going. Also, you have to hold it down firmly and wait for the turbocharged V8 engine that’s located behind you to crank up to its full bellow before you lift your thumb. You aren’t just pressing a button. This isn’t a laptop. You’re cranking up a high value asset.
That engine sound is magnificent. There are lots of V8s out there, but this one has a voice that’s unmistakably Ferrari’s. It’s no casual burble but, at idle, a series of rapid, violent punches into the air. Press on the gas and it turns into a ragged scream. Listen carefully and, if you’re pressing hard enough, there’s a distinct undertone of turbocharger whirr.
If you’re hearing all that then you’re also being pressed hard into the seat. The Ferrari F8 Spider, a convertible version of the Ferrari F8 Tributo, has a 710-horsepower engine that builds speed quickly and easily. It can go from zero to 60 miles an hour in under three seconds, according to Ferrari. I didn’t specifically check that claim, but it is entirely believable.
The steering is equally quick and responsive with a very nice feel to it. Ferraris have a way of giving a rich and detailed feel of the road and the car’s own movements without making you feel like you’re driving a go-kart. It’s a nicely intuitive experience, especially in a car like this where you’re looking down over a deeply sloped hood with fenders that rise up a bit on each side.
The benefits of the Ferrari F8 Spider’s mid-engine design are evident here, too. The car’s center of gravity is very nearly where your body’s center of gravity is. This F8 feels like it’s moving with you rather than just responding to steering wheel movements.
The transmission, a seven-speed automatic, is sort of a perfect metaphor for the car overall. It’s a twin-clutch automatic and, as with this sort of transmission generally, it’s quick and makes it feel as if the engine is firmly connected to the wheels at all times. Dual-clutch transmissions are great for performance, but they can also result in cars that lurch and heave at low speeds. There’s a little of that in the F8 when burbling casually through city traffic, but it’s more than made up for when the road ahead opens up.
I could shift gears for myself using steering wheel paddles but, mostly, there was no need to bother. The car was almost always in the right gear all the time. If I used the paddles to downshift it was usually just for fun, so that I could here that engine blast one more time.
With a starting price nearing $300,000 — and the final price tag ending up closer to $400,000 with options — you might wonder if a car could possibly be worth this much. The answer is yes. This one definitely is. And does Ferrari deserve to think so highly of itself?
Yes, I’m afraid it probably does.