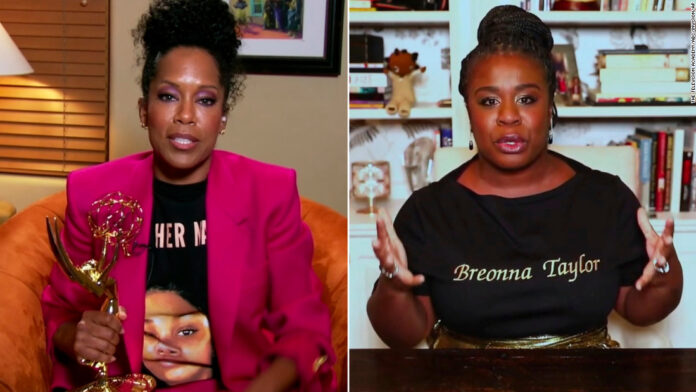 King, who won the award for outstanding lead actress in a limited series or movie for her role in “Watchmen,” wore a shirt featuring Taylor’s face.
Aduba, who won outstanding supporting actress in a limited series for her role in “Mrs. America,” wore a shirt emblazoned with Taylor’s name.
The actresses join a list of celebrities and athletes who have continued to bring attention to Taylor’s case.
The 26-year-old was gunned down by police in her home during a botched “no-knock” raid in Louisville, Kentucky, in March. Her death, along with the death of George Floyd and other Black victims of police violence, reignited the Black Lives Matter movement and spurred renewed calls for racial justice and police reform.
None of the officers involved in the flawed raid have been charged with a crime.
Kentucky Attorney General Daniel Cameron, the first Black person to hold the post and a Republican rising star, was made a special prosecutor in the case earlier this year, and the FBI has opened an investigation as well.
The city of Louisville agreed Tuesday to a $12 million settlement with Taylor’s family.