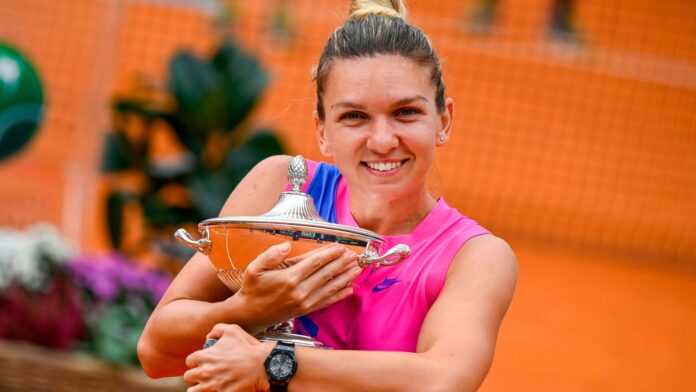 Simona Halep claimed the Italian Open in Rome on Monday after Karolina Pliskova retired through injury when she was 6-0 2-1 down.

The Romanian, who even shook off a hard fall in the second game, was at her aggressive and disciplined best while Pliskova looked sluggish with her on-court movement, failing to hit a single winner as she was bageled in 20 minutes.

Second-ranked Pliskova received treatment on her lower back and leg after Halep won the opening set.

Since 2013, when Simona Halep won her 1st of 22 titles, only Serena Williams (27) has won more titles than the Romanian.

The limited number of fans allowed into Foro Italico’s centre court urged Pliskova to make it a contest, applauding the rare points she got on the scoreboard, and it seemed to work as the second set started with the pair breaking each other.

However, Pliskova was clearly struggling with an injury and the Czech opted to retire to give Halep her first title in Rome.

“I know that’s not the way how Karolina wanted to finish the tournament and the final,” Halep said at the trophy presentation ceremony. “Good luck in the French Open, hopefully we will meet again there in the final.

“Finally, after two finals I could win this title. I love this tournament and I’m really happy that I have this beautiful trophy in my hands now,” she added, having lost the final in 2017 and 2018.

Victory gave Halep her third consecutive title of the year after winning in Dubai before the COVID-19 hiatus and then in Prague last month, as well as extending her winning streak to 14 matches.

She will head to Roland Garros as one of the firm favourites with world No 1 Ashleigh Barty and US Open champion Naomi Osaka both skipping the tournament this year.