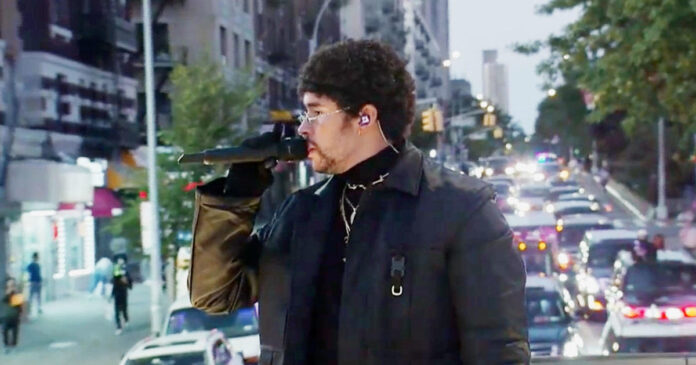 Bad Bunny performed a concert on a moving flatbed truck and stopped traffic throughout New York City on Sunday night, leaving fans in the streets and online in a frenzy. The concert began at Yankee Stadium while the Puerto Rican reggaeton star made his way to the front of Harlem Hospital, where he paid homage to front-line workers during the coronavirus pandemic.

“Respect and thanks to those people who have sacrificed their lives, giving it all for the health of this city,” he said.

A live stream showed the Latin Grammy award-winning artist dodging traffic lights and excited fans chasing him down streets with their cellphones in hand in New York City.

He thanked Latinos for supporting him and offered words of encouragement during the pandemic.

“With a lot of faith in God, I sense that good things are coming,” he added. “I know we are going through very difficult times, but I have hope that people doing things with their heart, spirit, faith and hope, we’re going to move forward.”

The concert was done in celebration of Hispanic Heritage month, and it also fell on the third anniversary of Hurricane Maria, which devastated Bad Bunny’s home of Puerto Rico. New York City has the largest population of Puerto Ricans on the mainland U.S.

Bad Bunny was joined by virtual appearances from reggaeton stars J Balvin, Sech and Mora. The show was produced by Univision’s Uforia, the radio broadcasting and music events division of the company.

“We are extremely excited to celebrate the richness of Latinx culture during Hispanic Heritage Month with this one-of-a-kind live streaming experience, and also commemorate the Puerto Rico community’s resilience on the third anniversary of Hurricane Maria, in partnership with Verizon,” Jesus Lara, president of radio at Univision, said in a statement. “We are proud to showcase the artistry of Bad Bunny who has had such a profound impact on our culture and the music industry at large.”

The show was a hit online. The concert collected more than 10 million views and counting on YouTube, a Univision spokesperson told CBS News on Monday morning. Those figures don’t include the numbers on Uforia’s platforms.

Fans who watched from home praised Bad Bunny for his performance.