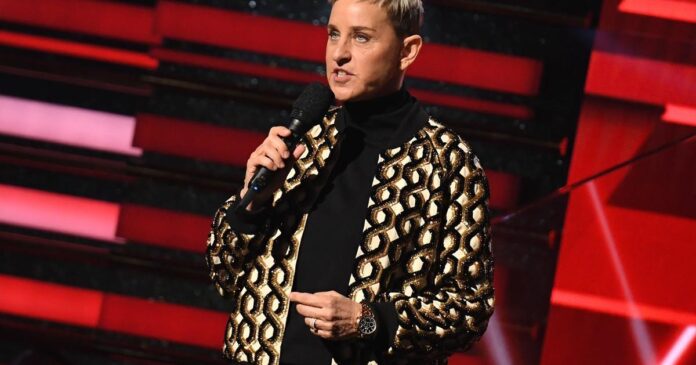 The latest season of “The Ellen DeGeneres Show” started like most on Monday, with its host opening with a welcome to those watching. But out of the normal, beyond the empty audience, was DeGeneres’ quick pivot to a less amusing subject matter. “Being known as the ‘be kind’ lady is a tricky position to be in,” said DeGeneres. “So let me give you some advice out there if anybody’s thinking of changing their title or giving yourself a nickname, do not go with the ‘be kind’ lady. Don’t do it.”

DeGeneres is referring to allegations her show suffered during the summer when BuzzFeed published a number of articles alleging harassment from top producers of the show. The publication spoke with 10 former employees, who claimed the show promoted a toxic, racist, and fearful workplace. A separate article also accused three producers of sexual misconduct. After an internal investigation, DJ “tWitch” Boss was promoted to co-executive producer of the show, while producers Kevin Leman, Jonathan Norman and Ed Glavin left the show. In July, Leman denied all allegations in a statement to CBS News.

While DeGeneres started the monologue with an apology, taking responsibility for the allegations at the talk show without addressing specific details, she focused most of her opening speech on denying implications that she was aware of the misconduct taking place behind the scenes.

“I’m a pretty good actress,” said DeGeneres. “But I don’t think that I’m that good that I could come out here every day for seventeen years and fool you. This is me. And my intention is to always be the best person I can be. And if I’ve ever let someone down, if I’ve ever hurt their feelings, I am so sorry for that. If that’s ever the case, I’ve let myself down and I’ve let myself down as well.”

After leading a round of applause for her 270 employees, DeGeneres called on viewers to look forward, calling the new season the beginning of a “new chapter.” In response to the investigation, “The Ellen DeGeneres Show” now offers staffers with five days of paid leave, as well as additional paid time for birthdays, appointments and family matters. Season 18 will continue without an audience due to coronavirus risks, but will still have in-person and virtual guests like Alec Baldwin, Kerry Washington and more.

“My hope is that we can still be a place of happiness and joy,” said Ellen at the end of her spot. “I still want to be the one hour a day that people can go to escape and laugh. I want to continue to help all the people that we help every day. And I’m committed to making this the best season that we have ever had.”