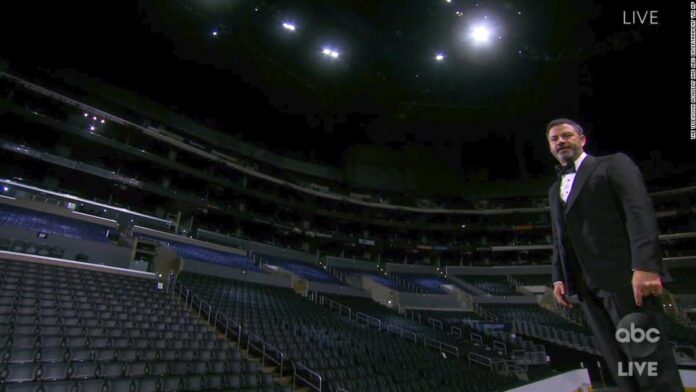 Based on Nielsen data, the Emmys delivered 6.1 million viewers, down about 12% from last year, which experienced its own steeper dive from 2018.
In some respects, credibly mounting the show at all represents a victory, certainly for the producers, Reginald Hudlin and Ian Stewart, who oversaw the ambitious plan to broadcast live with access to over 100 remote locales.
Yet the TV Academy and ABC, which carried this year’s show, have cause for disappointment, if only because there was so much curiosity, seemingly, regarding what it might look like, in the same way that the host-free Oscars produced a ratings bounce.
So what’s to blame? There’s no one factor, and as ABC noted, the competition included not only Sunday Night Football but an NBA playoff game featuring the Los Angeles Lakers. But the entire entertainment-awards complex appears to be paying a bit of a price for the continued fragmentation of content consumption. Or, translated into simple English: Award shows benefit from hits that give people a rooting interest in who wins, and there weren’t many hoisting Emmy statuettes on Sunday.
Instead, the ceremony was dominated by an HBO drama (“Succession”) and limited series (“Watchmen”), as well as the comedy “Schitt’s Creek,” which plays on the little-seen cable network Pop TV.
If you have cable or a dish and can’t immediately cite what channel number Pop occupies, odds are you’re not alone.
By contrast, not a single broadcast program took home an Emmy on Sunday night, a far cry from the days when popular series “ER,” “Cheers” and “NYPD Blue” walked away with top prizes. As recently as the last few years, the Emmys enjoyed a major draw with “Game of Thrones,” which averaged more than 19 million viewers in its final season across multiple platforms and plays, despite the distribution handicap of airing on a pay network.
The Netflix-ization of TV, with an influx of new streaming services, has undeniably boosted the overall quality of programming. “The world may be terrible, but TV has never been better,” Emmy host Jimmy Kimmel noted.
There’s a price, however, in the shift from millions watching TV shows “free,” by sitting through advertising, and splitting viewers into small clusters consuming programs they pay to see. Today, the percentage of the population familiar with many nominees is small compared to what it was even a few years ago, much less a decade or two.
All award shows are grappling with a variation of this problem, and despite a number of different strategies to combat it, there’s no readily available solution.
That might mean accepting declining award-show ratings as the new normal — the one really normal thing, in fact, in this most abnormal of years.

Trump v Biden: The key moments from their final debate