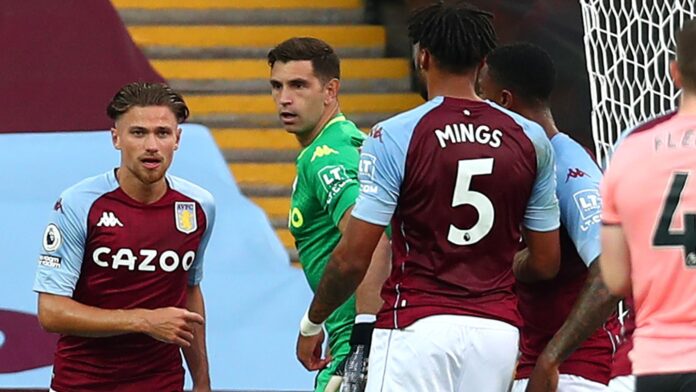 Chris Wilder’s side were on the back foot as early as the 12th minute when John Egan, who grappled with Ollie Watkins as the Villa forward looked to latch onto a loose ball, was adjudged to have denied a goal-scoring opportunity by referee Graham Scott.

However, the 10 men had the best opportunity of the first half when Matt Targett fouled Chris Basham in the penalty area. John Lundstram stepped up for the visitors, but his spot kick was brilliantly saved by debutant Emiliano Martinez.

With Villa starting to run out of ideas, it was the unlikely source of Konsa who headed home in the 63rd minute to hand Dean Smith’s side a winning start.

It was a cruel blow for Sheffield United, who put in a spirited performance, as they start with back-to-back defeats. Meanwhile, Villa are up to ninth after their opening win.

Man of the match: Ezri Konsa

How Villa saw of the Blades’ spirited challenge

Sheffield United got off to the worst possible start when they were reduced to 10 men in the 12th minute when captain Egan was shown red by referee Scott after tussling with Watkins as he attempted to latch onto a long ball forward from Tyrone Mings.

The referee adjudged the defender to have denied a goal-scoring opportunity and the decision stood following a VAR check.

Despite their numerical advantage, Villa failed to make the pressure count and the visitors were then handed a golden opportunity to take the lead in the 36th minute when Basham went down in the box following a tackle from Targett.

Scott pointed to the spot and once a VAR check had been completed, Lundstram saw his effort brilliantly pushed away by Martinez.

Conor Hourihane then sent a shot over the Sheffield United bar just before the interval, but the two sides went in at the break goalless.

The second half started in much the same vein as the first ended with Villa dominating possession, but the hosts struggled to find any way through the organised Sheffield United defence.

The breakthrough did eventually come though as the two centre-backs combined to give Villa the lead in the 63rd minute.

Targett’s corner was flicked on by Mings at the near post and Konsa headed the ball back across goal, past Ramsdale and into the far corner.

The hosts then attempted to add a second as Jack Grealish sent a couple of efforts wide, and Watkins, Trezeguet and John McGinn all did the same, but the missed chances didn’t prove costly as Villa held on for victory.

Analysis: Should Egan have seen red?

“There’s no doubt there’s a tug on the shirt but my problem with it is how sure is the referee that it’s a red card?

“He is far away; the linesman didn’t get involved and actually gave a throw-in.

“How can the referee be so sure when he is so far away? If that was given a yellow card, there wouldn’t even be a discussion.”

Aston Villa boss Dean Smith on Egan’s red card: “Ollie made a good run to get the other side of John Egan which resulted in the red card. As soon as the ref blew up for the free-kick, I thought it’d be a red card.”

Smith on Villa’s performance: “A very good start, to get three points and a clean sheet you can’t ask for more. I thought we stared the game the better and the game changes with the sending off. We’ve worked on Tyrone Mings getting across the near post, flicking it on and Ezri Konsa arriving. It’s difficult when they go in with two banks of four. We probably should have scored more.”

Sheffield United boss Chris Wilder on the decisions that went against his side: “The first one John has got the wrong side and both of them are pulling each other. The linesman can see it so why is he not flagging if he thinks it’s a foul? I think it’s a really harsh decision. It’s a bit of a tussle in my opinion.

“The second one, law changes… double jeopardy… maybe I’m confused and need to go on a referee’s course. My understanding is that if Matt Targett makes an attempt to tackle the ball it’s a yellow – Basham’s placed himself between the ball and Targett, he’s about to pull the trigger and there’s no way he’s made an effort to tackle.

“It won’t become a bad run because I believe in the players and they believe in themselves but we have stop shooting ourselves in the foot. At the moment we’re just in that period where we’re helping teams too much.”

Man of the match – Ezri Konsa

There were doubts as to whether Konsa would be able to continue as pictures emerged of the defender holding his hamstring as the players re-emerged from half time.

He continued to feel the back of his leg during the early stages of the second half, but he battled on, and in the end he popped up with the all-important goal.

He will have more difficult nights in defence than against the 10 men of Sheffield United, but what he was asked to do, he did with the minimum of fuss.

Aston Villa travel to Bristol City in the Carabao Cup on Thursday at 7.45pm before heading to Craven Cottage the following Monday for a 6pm Monday night Football clash against Fulham – live on Sky Sports Premier League.

Sheffield United are next in action next Sunday when they host Leeds United at Bramall Lane in the Premier League (kick-off 12pm).