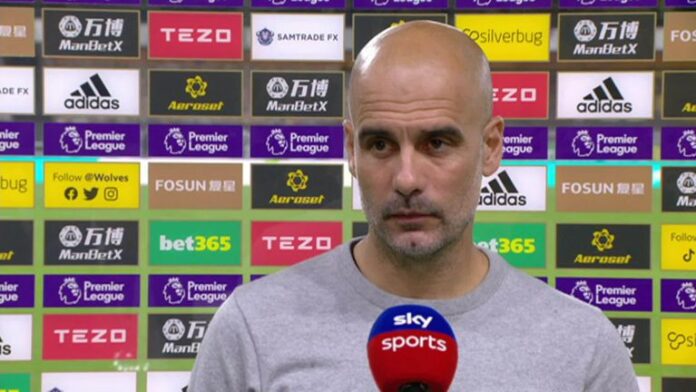 Jamie Carragher: “If you said to me, who would I want in my team? It’d be Kevin De Bruyne. The numbers he gets with assists and with goals, I just think he’s a manager’s dream”

Pep Guardiola reiterated Kevin De Bruyne’s importance to Manchester City, while Jamie Carragher hailed the Belgium international as one of the best players in the world, after he starred in his side’s 3-1 victory at Wolves on Monday Night Football.

The midfielder’s penalty and goals from Phil Foden and Gabriel Jesus ensured City ran out deserved 3-1 winners at Molineux.

They outclassed Wolves before the hosts hit back in the second half, with Raul Jimenez pulling a goal back only for Jesus to end their comeback hopes in stoppage time.

Victory meant a confident City opened their Premier League campaign in fine style with De Bruyne, the reigning PFA Player of the Year, starting where he left off last term.

“Since we came back with the national teams, every training session I feel his commitment and right now he’s an important player for us – always will be,” Guardiola said.

“In the situation we’re in now he is important for us. His penalty was strong, he played really well like all the team.

“He likes to play football, he doesn’t feel the pressure and likes to compete at a high standard.”

“I used to say that about Eden Hazard before he left to go to Real Madrid. Whether he won PFA Player of the Year or not, he was still the best player.

Is Kevin De Bruyne the best player in the world behind Messi and Ronaldo? 🌍 pic.twitter.com/Rx0MU73zJl

“When we talk about the best players in the world, I would say De Bruyne, Right now, I would put him top of the second band of players behind Lionel Messi and Cristiano Ronaldo.

“If you said to me, who would I want in my team? It’d be Kevin De Bruyne. The numbers he gets with assists and with goals, I just think he’s a manager’s dream.

“He played in the number 10 position, he plays right of a three and even speaking to Belgium boss Roberto Martinez, he plays him in central midfield. He will have great longevity in his career because I still think he’d have that ability to play that deep role, even if maybe his legs go a little.

“His passing ability is possibly as good as anything we’ve ever seen in the Premier League and he could play that central midfield role when he’s in his mid-thirties, not a problem.”

34 – Since start of last season, Kevin De Bruyne has been directly involved in more Premier League goals than any other player (34 – 14 goals, 20 assists). Continuous. pic.twitter.com/QjyBA7B4ha

Meanwhile, De Bruyne was pleased with City’s win at Wolves and his start to the season, especially after just two weeks of training.

“I think we played really well,” he told Sky Sports.

“Obviously in the second half there is going to be stages where it will be difficult because offensively they are strong. But we played secure and didn’t take many risks. With only two weeks of training it was going to be difficult.

“It’s obviously hard,” he added. “It’s a weird season. We know we need to start well. Wolves have been a bit of a bogey team for us in the last few seasons.

“So it’s encouraging to play well. We know if the pace is the same as the last three years, it will be a hard job and we want to fight against them. We know we make each other better and for me that is what sport is all about.”

Pep: We controlled the game

City dominated for long spells before Wolves recovered after the break and Guardiola was happy with his side’s display.

“I’m very pleased with the performance and the way we played,” he said. “All the team were really good, especially in the first half.

“The period that we are in and the situation we’ve had in these last two weeks, I expect in some moments we would suffer, but in general we controlled the game.”