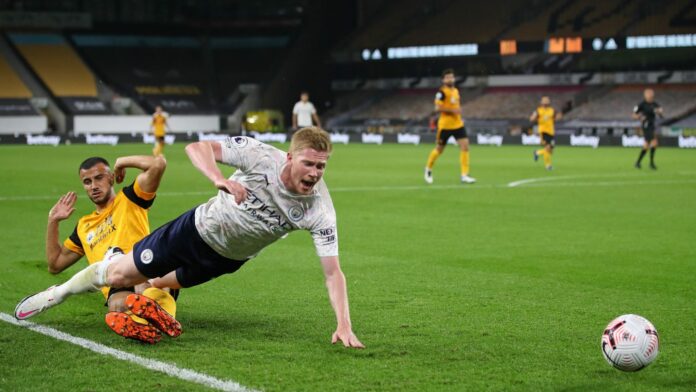 De Bruyne’s postage-stamp penalty inside Rui Patricio’s left-hand post after 20 minutes set City on their way to victory at a ground where they had been beaten last season, following Romain Saiss’ clumsy challenge on the Belgian.

When Phil Foden doubled the advantage from a lovely one-touch move 12 minutes later, it looked like Guardiola’s men would end up cruising to victory in their first Premier League game of the season.

But in the second half, Daniel Podence went close with two moments of quality from the hosts before Jimenez sidefooted wide from 12 yards – but the Mexican was not to be denied, and nodded in from the former’s cross to reduce the deficit.

However that proved the only time the hosts could find the beating of Ederson, with Nuno Espirito Santo’s side unable to recreate their heroics of last season’s last-gasp 3-2 win, as Gabriel Jesus’ late finish after De Bruyne won the ball back on the edge of the penalty area ensured a good evening’s work for the visitors (90+5).

In the absence of Aymeric Laporte, there were plenty of eyes on City new boy Nathan Ake at the heart of the visiting defence, but he had little to do in the opening 45 minutes as the visitors found themselves in full control.

That said, they did not put Patricio under any real pressure until they were awarded a 20th-minute penalty after Saiss slid in on De Bruyne in the area, allowing the Belgian to dust himself down and beat the goalkeeper from 12 yards, despite his best efforts.

The same could be said of the 12 minutes which followed before their second goal, which came in the style with which Guardiola’s sides have made their name. Started and finished by Foden, four touches between Jesus, De Bruyne and Raheem Sterling cut through the Wolves backline, and the England winger’s low ball across the box gave his young team-mate a simple finish to double the lead.

Wolves made one change from their opening-day win at Sheffield United, with Ruben Neves replacing Leander Dendoncker in midfield.

De Bruyne could have put the game beyond doubt when he skipped through and pulled a good near-post save from Patricio before the break, but City’s dominance at the half-time whistle gave little inclination of the Wolves response which would follow.

The visitors would carve out the opening chance of the second period, with a typically stunning De Bruyne pass setting Jesus free before he shot straight at Patricio from just inside the box, but from there it was one-way traffic for much of the half.

First Benjamin Mendy’s timid defending allowed Adama Traore time to pick out Podence in the middle, with the Portuguese’s deft swivel and shot missing the near post by a foot at most.

He came similarly close moments later from Joao Moutinho’s lofted ball, looking to catch Ederson off his line but lifting the ball narrowly over the crossbar from the edge of the area.

When Jimenez was next to line up an effort from a Pedro Neto cross, given the Mexican’s strike rate few would have expected him to sidefoot well wide when well-placed, but he would not be denied with 12 minutes to go as he turned in Podence’s excellent cross to bring Wolves back within a goal.

From there, though, City showed defensive solidity they often lacked as they were toppled as Premier League champions last season, denying Wolves another opportunity before sealing victory in the last minute of added time when De Bruyne’s husseling helped the ball fall to Jesus in the box, and his deflected effort beat Patricio at his near post.

Wolves manager Nuno Espirito Santo: “The first half we didn’t start very well. Man City moved the ball well and created a lot of problems for us.

“We conceded the penalty and from then on it become much harder. In the second half we improved. We created a lot of moments and chances we could score from. We knew one moment could change everything. Very good second half for the team.

“We always have to give credit to our opponents because of the talent and the quality they have, but we should do better.”

Manchester City manager Pep Guardiola: “It was a good performance. We know how difficult it is. The game was good.

“The plan is always to try and start fast. Sometimes the opening is good and sometimes we need more time to get our best conditions but the start was good.

“The goal and in the second half – he [Phil Foden] played incredibly well. We are tired in our legs but in general we did a good game.

“The period that we are in and the situation that we had in these last two weeks, I expect that in some moments we suffer, but in general we controlled the game.”

De Bruyne was at his typical sparkling best against Wolves with a goal he made himself, an assist and a hand in a third for Manchester City.

If his range of passing was not enough, the Belgian showed not only his creativity by creating more chances (six) than anyone else, he also committed more tackles (five) in a performance of real quality.

Wolves visit West Ham at the London Stadium next up on Sunday; Kick-off at 7pm.