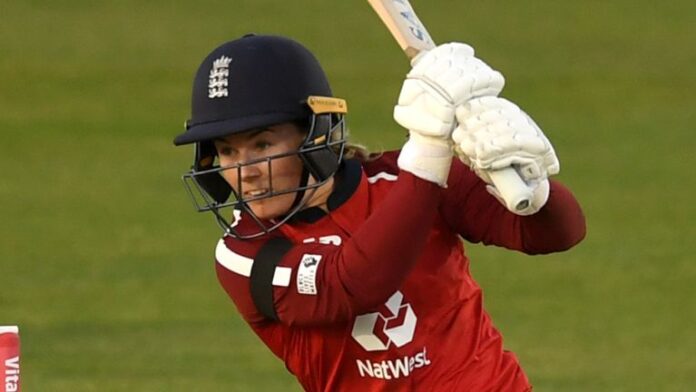 “Having three months off from cricket reminded me of the reason I started playing – the little girl in the garden that was just desperate to get out and play.”

England Women’s batting hero Tammy Beaumont admits she feared being left out of the side in the build-up to their T20 series against West Indies.

Beaumont was named Player of the Match after top-scoring with 62 from 49 balls as England swept to a 47-run victory in the opening encounter of the five-match series at Derby.

However, the 29-year-old had been uncertain of making the team following a poor run with the bat during England’s World T20 campaign in the winter – the last time they were in action prior to the Covid-19 outbreak.

Beaumont recalled: “A couple of weeks ago I was a little bit stressed, thinking ‘I’m not hitting them that well and I could end up out of the team here’.

“We’ve just got such a talented batting line-up at the moment and everyone wants to go at the top or in the top five, so it wasn’t unthinkable I’d have been left out.

“I kind of had a word with myself and said ‘you’ve still got a hand in it, you’ve got four or five games so just do your best, really enjoy it and embrace it.

“Having three months off from cricket reminded me of the reason I started playing – the little girl in the garden that was just desperate to get out and play. I think it was a good time to have a mental break from it and start loving cricket again.

“I managed to score a few runs in our inter-team games and it was all about managing to transfer that across into the real deal. Hopefully that’s a good innings to carry into the rest of the series.”

Beaumont and Danni Wyatt (17) got England off to a brisk start in the powerplay and she went on to share a third-wicket partnership of 52 with captain Heather Knight (25) as the home side posted 163-8 from their 20 overs.

By contrast, West Indies struggled to gain traction in the opening overs of their reply and, aside from Deandra Dottin (69), none of their batters ever looked likely to keep up with the required rate in their total of 116-6.

“(England coach) Lisa Keightley’s been asking us to go harder at the top of the order – it’s something we haven’t really nailed in the last couple of years in terms of how many runs we get in the powerplay,” Beaumont added.

“Obviously Danni Wyatt’s been brilliant there for a number of years but it’s a case of doing the right thing for the team and I was quite nervous going into tonight.

“But once I got off the mark I was happy because in January I got nought against this lot! I felt I was playing the way the team needed me to play.”