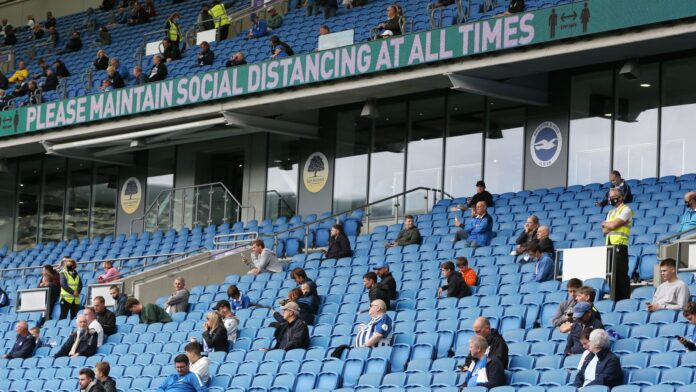 Plans to allow a controlled return of fans into stadiums on October 1 is set to be “paused” as the Government attempts to tackle a surge in Covid-19 cases.

Prime Minister Boris Johnson will unveil a range of new measures on Tuesday.

Plans for grounds to be up to a third full from October 1 were up for review but that is expected to be delayed due to the recent surge in cases.

“We’re looking at how we can, for the moment, pause that programme.

“We have to look at sporting events with caution.”

A number of cross-sport working groups have been drawing up plans which would allow the safe return of fans to watch live sport.

The Department for Digital, Culture, Media & Sport was tasked with co-ordinating that work and had told Sky Sports News on several occasions that October 1 was an ‘aspirational’ date which they would all work towards.

However, given the stark warning yesterday by the Government’s two leading medical advisers on Covid 19 – Sir Patrick Vallance and Professor Chris Whitty – about the continuing rise in confirmed Covid cases, the Prime Minister will announce a number of restrictions to counter the rise.

Meanwhile, the leaders of more than 100 sports bodies have written to Prime Minister Boris Johnson requesting emergency funds to stave off a “lost generation of activity”.

The group warns the future of the sector is “perilous” and urges the Government to provide a “sports recovery fund” in order to help the industry endure the prolonged effects of the pandemic.

The letter, written by organisations including the Football Association, Premier League, Rugby Football Union and England and Wales Cricket Board, reportedly states: “We require a comprehensive support package for the sport and physical sector to aid its recovery.

“This package must combine investment, tax incentives, and regulatory reform.

“Covid-19 has undermined our commercial revenue streams with both stadiums and leisure facilities closed or greatly reduced in capacity. The impact of this will potentially lead to a lost generation of sport and activity.”

The Premier League wrote to the government earlier this month saying around £100m per month will be lost by clubs across the leagues while matches continue behind closed doors.