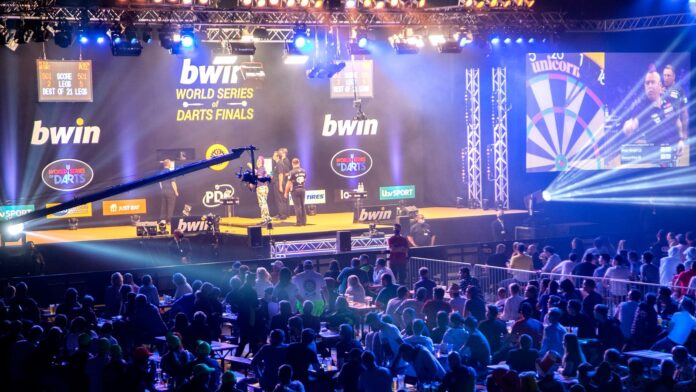 European Darts Grand Prix and International Darts Open scheduled for October, and will be played in front of fans

After a successful return to action in front of crowds in Austria over the weekend, the PDC has confirmed that two more European Tour events in Germany with fans in attendance have been added to the calendar.

Three nights of action in Salzburg ended with Gerwyn Price being crowned the World Series of Darts Finals champion for the first time, but just as important was the safe and successful return of spectators for three consecutive nights.

Never nice to see empty seats at an event but if that’s what it takes to make it safe then here’s the proof that we can deliver…. pic.twitter.com/kSOsULSZ36

Real Darts. Real Crowd. Great to be in Salzburg for a massive step forward tonight at the @bwin World Series of Darts.

Full credit to the @OfficialPDC and @PDCEurope teams to satisfy all the necessary requirements and deliver a safe environment. pic.twitter.com/lXbnUSb9CC

More than 1,000 fans were allowed into the arena on each evening and the players were full of praise for the return of an atmosphere. This will continue after the European Darts Grand Prix and International Darts Open were confirmed for October.

Both tournaments will be played in front of fans in Germany, adopting the relevant safety and social distancing regulations, which will give the PDC a chance to honour the commitments to the players who qualified for European Tour events earlier in the year.

The European Darts Grand Prix will be staged at the Glaspalast in Sindelfingen from October 16-18, featuring the field of players who had qualified for the year’s originally-planned third European Tour event.

The Sachsenarena in Riesa will then host the International Darts Open from October 23-25, which will feature the players who originally qualified for the year’s fourth European Tour event.

With four events now lined up, the top 32 players from an Order of Merit will comprise the field for the European Championship, while this weekend in Hildesheim represents the qualification cut-off for the World Grand Prix which takes place in Coventry and can be seen on Sky Sports.

Qualifiers Niels Zonneveld and Simon Stevenson have withdrawn, and two extra places will be awarded to the Host Nation Qualifier.

So far since the PDC’s resumption, all of the action in the UK has taken place behind closed doors, with the World Matchplay, the Premier League and July’s Summer Series all held in the biosphere created at the Marshall Arena in Milton Keynes.

The Ricoh Arena in Coventry will host the World Grand Prix without fans after the Citywest Hotel outside Dublin was made unavailable and it remains to be seen when fans will be allowed back in to watch the sport.

There had been hope the the Premier League Play-Offs, scheduled for The O2 on October 22, might have been able to take place with a small crowd, but the government are expected to announce plans to delay the return of fans as they deal with a spike in coronavirus cases and it remains to be seen what impact that has on the PDC’s hopes.