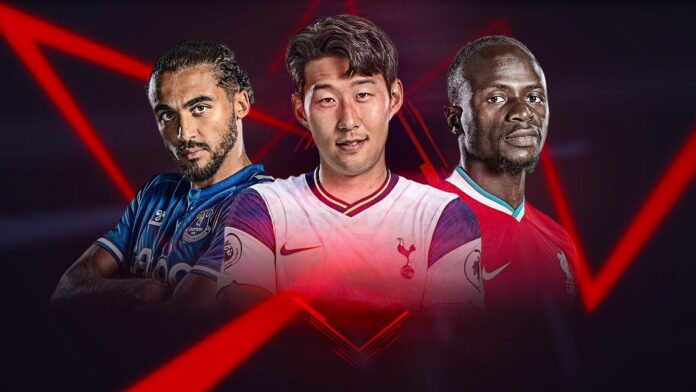 Liverpool, Everton and Spurs all have two players each in top 10, including Sadio Mane, Mohamed Salah, Dominic Calvert-Lewin, James Rodriguez and Harry Kane

Sky Sports and Budweiser, the King of Beers, have teamed up to bring you the weekly Power Rankings.

Tottenham forward Heung-Min Son soared to the form chart summit after his four-goal haul during the 5-2 win at Southampton – all assisted by Harry Kane (No 8), who also got off the mark with eight minutes left on the clock.

Everton capitalised on Kieran Gibbs’ red card in first-half stoppage time to beat West Brom 5-2, with Dominic Calvert-Lewin (No 2) scoring a hat-trick and James Rodriguez (No 4) hitting the Toffees ahead just before the break with a delicious strike.

Merseyside rivals Liverpool also took advantage of playing against 10 men to beat Chelsea 2-0 at Stamford Bridge, thanks to a match-winning double from Sadio Mane (No 3) – who leapfrogged team-mate Mohamed Salah (No 7) in the chart.

Crystal Palace rocked Manchester United in a 3-1 win at Old Trafford, with Wilfried Zaha (No 6) making it three goals in two games after converting a penalty and netting a second five minutes from time as United pushed for a leveller.

Helder Costa (No 9) netted twice as Leeds continued to impress on the eye in a 4-3 win over fellow newly-promoted Fulham, while Dennis Praet (No 10) scored the pick of the goals as Leicester shored up top spot in a 4-2 win against Burnley.

It didn’t take long for Kevin De Bruyne to fly up the chart. The Belgium international produced a man-of-the-match performance as Manchester City got their campaign underway with a 3-1 victory at Wolves on Monday.

A new name emerged in the rankings: Jimmy Dunne. The Burnley youngster was among the goals in the 4-2 defeat at the King Power, while Matheus Pereira hit a dazzling free-kick past Jordan Pickford to top the West Brom standings.