Home World The hidden side of Abu Dhabi 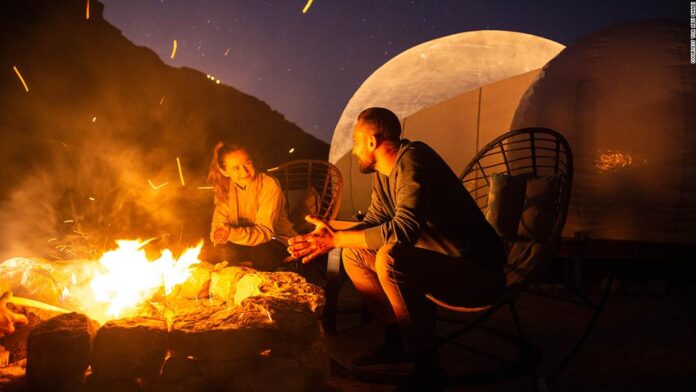 Editor’s Note — CNN Travel’s series often carries sponsorship originating from the countries and regions we profile. However, CNN retains full editorial control over all of its reports. Read the policy.

(CNN) — It’s Friday morning. My friends and I are out cruising on my speed boat. We skim across the water, flat like ice, through the waterways that weave around nearly 200 islands.

One minute, the city skyline can be seen hugging the horizon, the next, we’re surrounded by mangroves. The stresses of the working week are blown away and we’re reconnecting with nature.

Before the world came to a standstill, this was the typical start to a weekend in my home city, Abu Dhabi, when I wasn’t on the road, reporting from across the Middle East and Europe.

The global pandemic has shattered our sense of normalcy and put many activities and escapes on hold, but it has also forced us to rethink our relationship with our immediate surroundings.

For me, it’s offered a deeper appreciation of all the things I enjoy about Abu Dhabi. It’s a place that continues to surprise with new adventures and experiences. It’s also a place of natural beauty with a landscape that provides both exciting physical challenges and sensory wonders.

As we slowly emerge from lockdowns and travel restrictions, I’m already yearning to immerse myself once again in Abu Dhabi’s delights — the captivating greenery, the boundless desert sands, the jagged mountains, the glassy seas and its panoply of cultural treasures.

And while we wait, my mind continues to explore my favorite places — locations and venues that not only make Abu Dhabi eternally alluring for us residents, but which we also look forward to sharing with future visitors to the emirate.

Zaya Nurai is a natural island that lies 12 miles off Abu Dhabi’s coast. Home to privately owned villas and one hotel, it will set you back $1200 minimum to stay here for the night.

If you’re passingly familiar with the city Abu Dhabi, it’s easy to forget that it’s built on an island. You’d recognize the main island with its soaring high rises, its glamorous hotels, and the world-famous Sheikh Zayed Grand Mosque. But there’s also loads of fun and adventure to be found on the many smaller islands dotted around.

Our usual destination on those Friday speedboat excursions is Zaya Nurai Island. The private resort is our tropical oasis away from the urban sprawl. It’s like the Maldives of Arabia. Neat villas sit along the tiny island’s sculpted curves. Instagram-perfect powder beaches dissolve into endless turquoise seas. Sunsets bring uninterrupted views of fiery pink and purple skies.

The island is a perfect spot for a lazy day of relaxing by the shoreline, chilling by the pool and enjoying mouth-watering Arabic seafood mezze whipped up by Chef Marc and his team. The fatteh shrimp and grilled hamour are flavors I can’t wait to sample again.

These all offer great days out, but there’s a new adventure on Yas that’s calling to me right now — Clymb. In contrast to its many opportunities for relaxation, Abu Dhabi is also emerging as a place where the pursuit of exercise and adrenaline sports is increasingly possible. I’ve certainly never been as fit as I have since moving here.

I have yet to muster enough courage to tackle the Summyt — at 43 meters, this angular monster is only just under the height of the Statue of Liberty — but thankfully there are four other less intimidating walls I’ve been able to practice on.

Some people treat Summyt as a mere workout. Avid climber Mohammed Al Zaabi, who runs Yas Island real estate developers Miral when he’s not scaling the heights, says Clymb was inspired by “the mountains of the UAE.” To explore those real-life inspirations you have to leave Yas and other islands behind and head inland.

Sometimes the journey is the destination. That’s the case with Jebel Hafeet, Abu Dhabi’s highest peak. To get there you have to take the Jebel Hafeet Mountain Road, one of my favorite drives in the emirate. It takes you all the way up the mountain, 1,220 meters above sea level, through a zigzag of hairpin bends and turns.

Along the way are lookout points where on clear days you can stop and see the unique Arabian landscape mapped out beneath you — all the way to the sea and the horizon beyond. At sunset, the shadows stretch out for miles before the melting sun and then the lights of the towns and homesteads below begin to shimmer on the cooling plains.

For the really fit, the Jebel Hafeet’s smooth road provides a great cycle route. Its challenging 7%-average gradient is a magnet for riders who like a challenge. The grueling uphill battle tests stamina and endurance and has quickly become a favorite feature of the six-stage UAE Tour, part of cycling’s global circuit of elite road-racing events.

Beneath the mountain, the baked terrain of its foothills conceals historical treasures. The recently opened Jebel Hafeet Desert Park is one of the UAE’s first UNESCO World Heritage sites with remains from the Neolithic period and 5,000-year-old Bronze Age tombs. It’s a pretty good location to spend the night glamping in a Bedouin-style tent and stargazing into the desert night.

Past, present and future

The Al Ain Oasis is a lush escape from sometimes harsh temperatures.

Just a short drive away is another UNESCO World Heritage site and one of my favorite locations in the whole of the country. So much so that I shot parts of my last promo here for “Connect the World with Becky Anderson.”

The Al Ain Oasis is a lush forest of lofty palm trees that reaches into the heart of Abu Dhabi’s historic second city, a green escape from the modern world.

The UAE’s founding father, Sheikh Zayed bin Sultan Al Nahyan, once said: “He who does not know his past cannot make the best of his present and future, for it is from the past that we learn.”

To me that quote best summarizes how I see Al Ain Oasis. Walk among the towering palms, and you are immediately transported back in time. Its unique falaj irrigation system — a maze of channels through which streams of gurgling water can be directed to where they’re needed the most — and neatly organized farms tell the story of a people who succeeded in taming the harsh desert through hard work and ingenuity.

In its cool shade, you understand where this place came from, how it has gotten to where it is, and why it is determined to succeed in the future. The oasis was nearly lost to the encroaching city a few years back, but that desire to preserve heritage has instead seen it flourish into the magical place it is today.

I love history, and thankfully Abu Dhabi is rich with it.

High on my list of places to dive back into when it’s possible is the newly renovated Qasr Al Hosn, an ancient fortification back in the capital.

The city’s oldest stone building has foundations dating back to the 18th century and was once home to the ruling family and the seat of government.

Over the centuries Qasr Al Hosn, or the “palace fort,” has been everything from the seat of power to a community library.

Brilliantly restored, the structure’s dazzling white buildings now tell the complete story of Abu Dhabi. It reveals how a tiny fishing and pearling settlement grew into a global cosmopolitan powerhouse.

Surrounded by skyscrapers on a wide open plaza, it feels like the true heart of this ever-evolving destination. And an added bonus, there are a handful of chic cafes close by to enjoy a well-deserved break, preferably a cup of qahwa — the Arabian coffee that’s another unmissable flavor of Abu Dhabi.

Housed in a masterpiece structure conceived by Pritzker Prize-winning French architect Jean Nouvel, the museum looks like a floating dome when seen from afar.

Another relative newcomer to the city that’s quickly become an old friend is the Louvre Abu Dhabi.

It’s hard, if not impossible, to get enough of this place. Inspired by the Al Ain Oasis, the building itself is an architectural marvel. You can easily get lost in the beauty of its dome or the mesmerizing way its exhibitions seem to effortlessly float on water.

There are, of course, world-beating displays of art inside the museum, but I’m just as intrigued by Louvre Abu Dhabi’s universal message. Instead of categorizing art and history in neat historical or regional blocs, Louvre Abu Dhabi asks us to see the common connection of humanity and how we are driven by the same passions and ideals.

That’s a powerful reminder at a time of a global pandemic which has once again proved how similar we all are despite all our differences.

And that is the essence of Abu Dhabi to me. Beyond all the amazing destinations and unique experiences lies a commitment to tolerance and diversity that makes the city stand out. It’s a melting pot of people and cultures that pushes visitors and residents to expand their horizons and to embrace the diversity that comes with being a truly global hub.

Sooner or later this pandemic will be over and we will slowly return to exploring our world. I hope those explorations include Abu Dhabi, a city I’m proud to call home.