Home Culture Theatre and hotels to be transformed into ‘Nightingale courts’ to help clear... 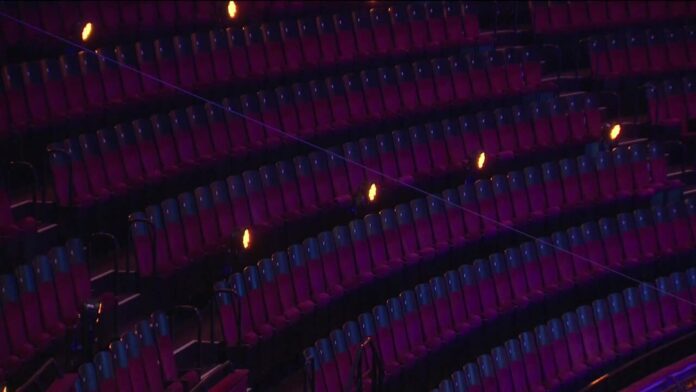 A theatre and two hotels are to be converted into temporary courts to help clear a backlog of cases due to the pandemic.

The Lowry in Salford, the Hilton Hotel in York and Jury’s Inn in Middlebrough are the latest buildings to become Nightingale courts.

It follows warnings from Max Hill, director of public prosecutions, who said delays are “corrosive” as they force victims to wait for justice.

:: Watch and follow live on Sky News as Boris Johnson updates MPs on coronavirus plans at 12.30pm – with a Downing Street broadcast at 8pm

Courts in England and Wales are facing a backlog of around half a million cases after being forced to shut during lockdown added to existing delays.

Magistrates’ courts are dealing with around 21,000 cases a week, and crown courts more than 1,700 cases at the same time, while holding more than 100 jury trials.

The court inside the The Lowry theatre and gallery complex on the Salford Quays will become operational on 28 September, in a deal to help secure the venue’s future after the coronavirus outbreak put a stop on venues being able to stage shows.

It will have four court rooms hearing criminal cases where defendants are not being held in custody, while the Middlesbrough hotel will deal with both civil and family cases. The hotel in York will hear family cases.

Temporary Nightingales courts have been set up across the country to help the Ministry of Justice navigate the backlog of cases that have been on hold over the COVID-19 lockdown.

A further five are earmarked for Chester, Liverpool, Bristol, Winchester and Cirencester and could open next month but the sites are yet to be confirmed.

Justice Secretary Robert Buckland described the move as an “important step”, but added: “We must keep going if we are to get our courts back up to speed.”

It brings the total number of Nightingale courts to 17, providing 32 court rooms, the MoJ said.

The Lowry says the deal will provide it with a “much needed source of income… while social distancing measures make theatre performances economically challenging”.

Theatres remain one of the few industries struggling to reopen after the lockdown with industry leaders saying while social-distancing remains in place, it is not financially viable to put on shows.

Andrew Lloyd Webber, writer of shows such as Phantom of the Opera and Cats, has repeatedly appealed to the government for support for the theatre industry while it is closed down, most recently to the commons’ culture committee.