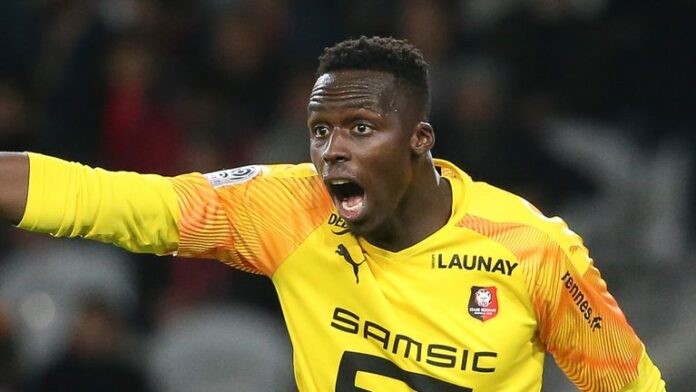 Mendy underwent medical on Tuesday ahead of £22m move from Rennes

Frank Lampard has revealed that Petr Cech was a prominent figure in Chelsea’s decision to sign Rennes’ Edouard Mendy, and says he leans heavily on his former team-mate for goalkeeping advice.

Mendy – who underwent his medical on Tuesday ahead of his £22m transfer – is set to move to Stamford Bridge to provide competition for Kepa Arrizabalaga, whose game has been plagued by mistakes over the past year.

The 28-year-old will arrive from Ligue 1 club Rennes – coincidentally, the same side from which Cech signed for Chelsea in 2004.

Cech went on to win 13 major trophies during his 11-year spell in west London and is now the club’s technical and performance adviser.

Ahead of Mendy’s arrival, Lampard said: “Petr was important in that because goalkeeper is a very particular position. Petr Cech was the best in the world in that position for a long time so he’s obviously had a big say in this situation.

“From my point of view, I lean heavily on him when it comes to goalkeeping today and in the future. So yes, he was very influential.”

Chelsea will be looking to bounce back from their 2-0 defeat at home to Liverpool on Sunday when they take on Championship club Barnsley in the Carabao Cup third round on Wednesday evening.

While Lampard is prioritising progress in a competition Chelsea have won five times, he admits the chaos caused to the fixture schedule by coronavirus means he is keen to improve fitness levels amongst his squad.

He said: “This game for me is, of course, about getting through to the next round, but I have huge eyes on the fitness of the team. We’re not fit now, which means with our pressing and the speed of our game, it’s very difficult to attain the levels that we want.

“So I’ll use the game primarily for the first-team squad. Also, we have the issue with the bubble where we cannot just grab guys from the academy for the first team. So that’s stopped me from getting some young players involved, which I would have liked to have done.

“We’re in a very difficult position. We had pretty much as short a break as you could have because of our Champions League game against Bayern Munich, which took us two weeks beyond the regular season. Then we came back and played when everybody else started, unlike a few other teams in the Premier League.

“We also made some new signings. We also had double figures of quarantines at the start of pre-season, so we’re clearly in pre-season mode. That’s why I’m not being too judgemental of the squad at this point, because we are short on fitness.

“On top of that, I want to work on how we play. We showed fantastic stuff for big periods last year and we want to move that a step further.”

Lampard revealed that Thiago Silva and Ben Chilwell will both be in the squad for the first time for the visit of Barnsley, but Christian Pulisic and Hakim Ziyech are unlikely to be fit.