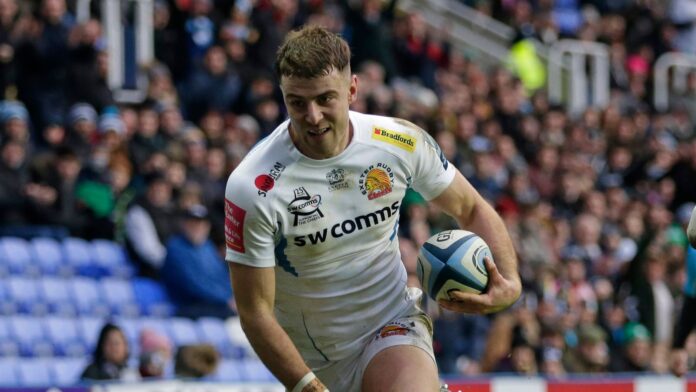 Ollie Devoto says it is vital that Exeter do not let Toulouse build momentum in Saturday’s Champions Cup semi-final.

The Chiefs host the French giants at Sandy Park in what will be the English club’s first appearance in the last four of the European competition.

Exeter were impressive in their 38-15 victory in the quarter-final against Northampton, while four-times European champions Toulouse demolished Ulster 36-8 at home to book their place in the final four.

“With any French team it is 70-80 per cent emotion, when they get it right they are pretty much unstoppable,” said Exeter centre Devoto on Will Greenwood’s podcast.

“You cannot allow them to get momentum, so for us the start of the game is going to be important. We are lucky that we are at home and we are confident there.

“If we give guys like (Antoine) Dupont space, then they are going to take it. I cannot wait for it – it is going to be huge.”

Toulouse are full of exciting talent, with the likes of Dupont, Romain Ntamack and Cheslin Kolbe a real handful in the backs. However, if Devoto does get the nod for Saturday, Greenwood has some advice for him: “Everyone is talking about Kolbe, but do me a favour and keep a look out for Sofiane Guitoune’s out-to-in line.

“He runs a hard apex off No 10. He has his socks down and does not look like a physical threat but he is absolutely class at making you look like a mug when you think you have him covered!”

As well as making the final four in Europe, Exeter have also sealed a play-off spot in the Premiership and Devoto has revealed what it is like within the club as they battle on two fronts.

He said: “It is an infectious environment at the moment – everybody wants to play for this team. If you are not quite on it, there are two or three guys who will step in and do the job – it’s a bit of a wake-up call and adds fuel to the fire in training.

“Where we are special is that I genuinely enjoy turning up with the team – they are your best mates. I think it is a unique situation where you are with your mates all the time – that is definitely one of the catalysis as to why we are so successful on the field.”

Devoto is hoping to add to his two England caps but admits he has to work on some areas of his game.

“I think looking at the 12 role for England, it is about front-foot rugby and getting England over the gainline. Manu Tuilagi is probably one of the best in the world at doing that,” he said.

“I have had conversations with Eddie (Jones) and that is what he wants from me – he sees his 12 as that go-to guy. I think that is an area I can definitely develop. I have the handling capabilities having played at 10 and 15. My game awareness needs to come on but I think one area I need to improve is my carrying.

“I think it is about making the right decision at the right time. I do like to distribute and, being a big guy, people do sit down for you in defence. I am often that guy who makes the play that makes the backs look good and they score – but I want a little bit of that for myself sometimes.

“Having the ability to do all of them would stand me in good stead.”