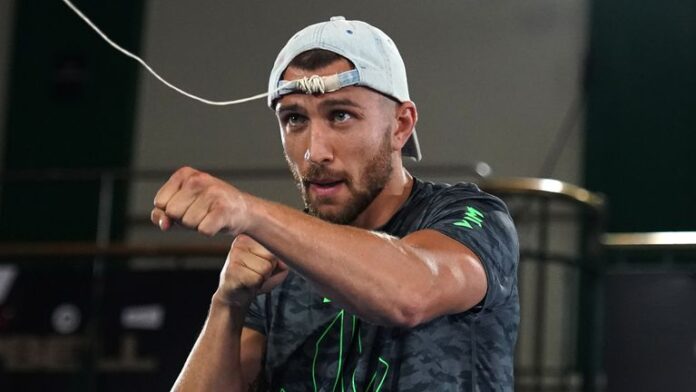 “I’m 32, I’ve been very long in this sport so of course my body has tired a little bit,” Lomachenko admits

Vasiliy Lomachenko has thrown down the gauntlet to Teofimo Lopez and demanded his young rival justifies his outspoken behaviour when they fight.

Lomachenko and Lopez will collide in a world lightweight unification clash in Las Vegas on October 17.

Brash New York-based Lopez is the undefeated IBF champion – he is nine years younger and his bold predictions have caught Lomachenko’s attention.

WBA, WBC ‘franchise’ and WBO champion Lomachenko exclusively told Sky Sports about Lopez: “I understand just one thing. Whatever you say, you must prove it in the ring. That’s it.”

The Ukrainian previously told Top Rank, who promote both boxers: “In my country, if you insult somebody, you’d better be prepared for them to hurt you.

“If we were back in my country, he would learn pretty quickly that he can’t run his mouth like that.

“Whatever I say, I believe in it. So what he’s saying, for example, he actually believes. But if he doesn’t follow it up with actions and fulfil those words, then he chose those words poorly to begin with.

“I’m definitely not going to feel sorry for him. If I get a chance to cause him pain, I’m going to do it.”

He has since wowed a UK audience by beating Luke Campbell in London.

Lomachenko insists the 14-month gap between fights has allowed injuries to heal, and will not be at a disadvantage against the fresher Lopez.

“Everything is good,” he told Sky Sports about previous injuries. “I’ve had a one-year break without a fight. Now I’m healthy and happy.

“I’m 32, I’ve been very long in this sport so of course my body has tired a little bit. But I’ve had a break.”

Victory for Lomachenko against Lopez would further elevate him towards greatness – his opponent’s IBF belt is the only lightweight title that he hasn’t yet owned.

“I am close to my goal,” he said. “This is one step closer to my dream.

“Fans love the interesting fights with top fighters. Now we have a unification and we are the top fighters in this weight class.

“I want to unify.

“I want to put my name in boxing history.

“I started very early – my second fight of my pro career was a world title fight.

“I want to do something special with this opportunity.”