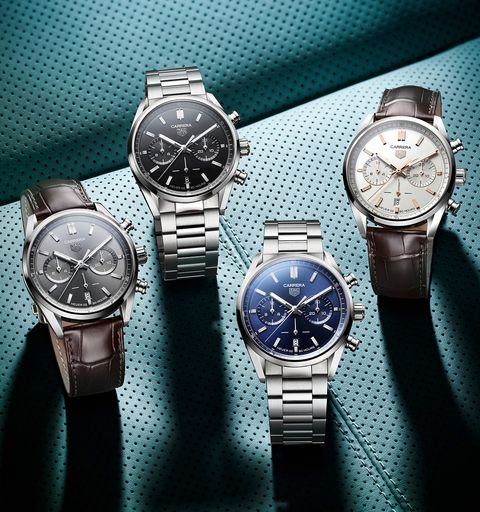 Chronographs by definition work with the standard start, stop, and reset function of their buttons on the top and bottom right to time whatever it is you need to time from lapping Lambos at the Nürburgring to boiling an egg. But that doesn’t mean that this vital complication need come with attendant busyness on the dial. While many modern chronographs, as if by force of habit, proclaim their tooliness with extra markers and numbers beetling across the dial, there is something to be said for the clean lines of a chronograph with the long-strand DNA of the Heuer Carrera, established way back in 1963. Last week, Tag Heuer marked its 160th anniversary with a reboot of the Carrera family in a four-version edition that owes as much to innovation as it does to its storied forebears.

The new watches, priced at $5,350, have sunray or opaline (semi-matte) dials, and a mix of polished and matte surfaces that gives them a sophisticated, almost dressy look. The watches’ third subdial, at 6 o’clock, has been flattened from its original imprinted shape to simplify the look. They also carry an in-house movement, the Heuer 02, and an 80-hour power reserve—facts touted, albeit discreetly, on the dial. But the new Carreras also still bear a very clear through-line to the original Carrera. 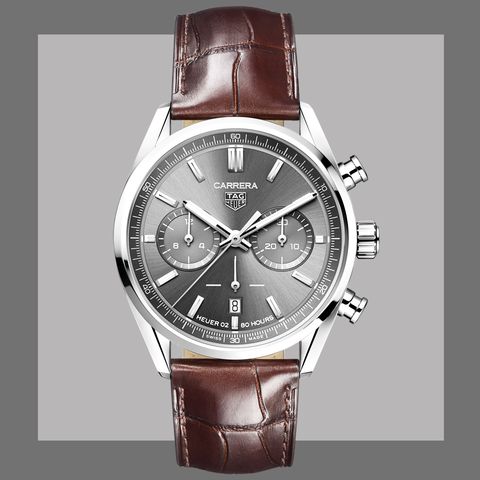 The Carrera with an anthracite sunray dial and brown alligator strap.

Designed by industry legend Jack Heuer himself, when it emerged in ‘63 the Carrera ushered in a new breed of sleek, modernist chronographs. With a reputation shared to date with only a handful of makers, Heuer prided itself on its chronographic past. Yet times were changing. Jack Heuer, according to legend, loathed busy dials but loved modern, minimalist architecture. He set out to declutter his Carrera from the outset. This was a time when tool watches were beginning to cross the divide between professional use and a broader public market. In a stroke, he removed the complicated telemetry gauge that had long been a standard feature of chronograph dials, used most recently by artillery officers during wartime to calculate the distance of exploding shells. 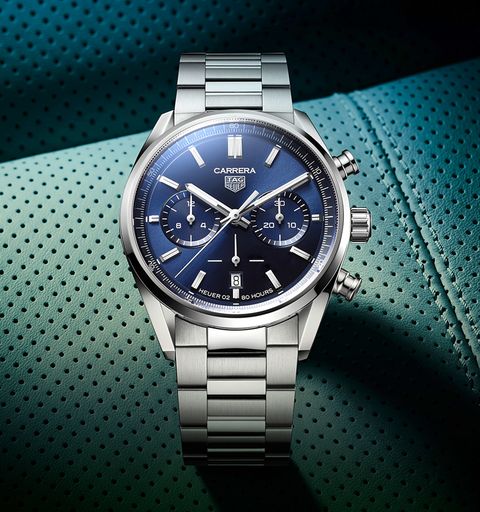 The Carrera with a dark blue iridescent dial and steel bracelet.

This was Jack’s second new watch since he bought up his uncle’s shares and a controlling interest in 1962, becoming only the fourth generation Heuer at the helm great grandfather Edouard Heuer had founded a century before. The Carrera came hot on the heels of the Autavia, Jack Heuer’s opening salvo in a bid to modernize Heuer. But while the Autavia was a name first used in the 1930s for a discontinued line of car dashboard clocks, the Carrera was named for a lethal professional road race down the Pacific coast of Mexico that claimed the lives of drivers and spectators with equanimity for five seasons until it was finally shut down in 1954. And the Carrera marked the beginning of a long and consistent habit at Heuer of giving watches evocative model names that resonated with an ever wider public.