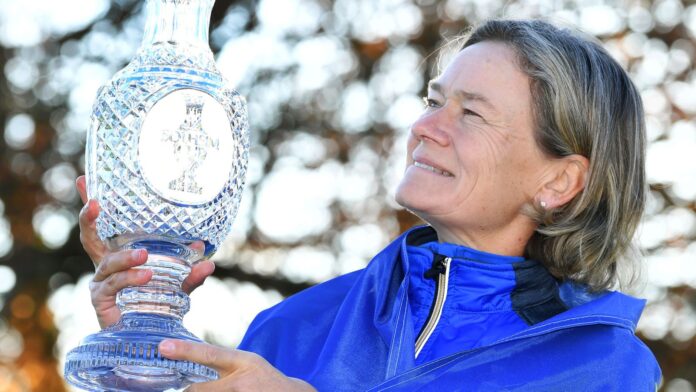 Catriona Matthew has confirmed that changes have been to the qualification system for Team Europe’s 2021 Solheim Cup side.

Matthew has retained her captaincy for next years’ contest at Inverness Golf Club in Toledo, Ohio, having guided Europe to a dramatic 14.5-13.5 victory in the 2019 event at Gleneagles.

The European team was previously made up of three players from the Ladies European Tour points list, five from the world rankings and three picks, although significant alterations have made for the 2021 edition due to the coronavirus’ significant impact on the women’s golf schedule.

Only two will come from the Ladies European Tour points list and four from the world rankings, with Matthew then able to make six wildcard selections to complete her line-up.

Speaking in a Tee It Up Toledo event, marking less than a year to go until the 2021 Solheim Cup, Matthew said: “We actually have changed our qualification for this match because of the kind of impact on the schedule this year.

“We’ve changed it to two from the LET (Ladies’ European Tour) points, four from the world rankings and six picks.

“We just felt, with the players not playing as much and all the schedules being up in the air, that it was just nice to do that and give you a bit more options and what you might do going forward next year.”

The United States are currently planning to stick with the two captain’s picks, with eight coming from the Solheim Cup points list and two from the world rankings, although USA captain Pat Hurst hasn’t given up hope on having more control over her side.

“Definitely more than two…I think four would be great,” Hurst said. “I don’t know if we’ll get that. Who knows…let’s keep our fingers crossed and see if we can get four.”

Tickets for the 17th edition of the Solheim Cup, which takes place at Inverness Golf Club in Toledo from August 31 to September 6, 2021, are already on sale at solheimcupusa.com.