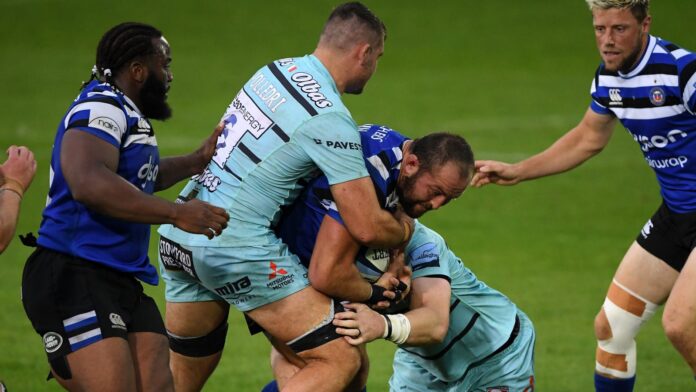 Bath staged a stunning fightback to stay on course for the Gallagher Premiership play-offs by beating west country rivals Gloucester 31-20 at the Recreation Ground.

Gloucester led by 17 points entering the final quarter, but Bath moved second in the table after hooker Tom Dunn touched down twice in five minutes, before prop Lewis Boyce powered over and scrum-half Ben Spencer added a 78th-minute bonus-point score.

Fly-half Rhys Priestland kicked four conversions and a penalty, and victory over Saracens in their final regular season game on Sunday week will be enough to secure a top-four finish.

Gloucester conceded 28 points during the final 19 minutes, and they could scarcely believe what had hit them.

The game was played behind closed doors after Bath’s hopes of welcoming 1,000 spectators as Premiership rugby’s latest pilot event were dashed just hours before kick-off.

Concern over a second wave of coronavirus infections has resulted in plans for supporters to attend sports venues in England from October 1 to be placed on hold as part of additional new restrictions announced by Prime Minister Boris Johnson.

Twelvetrees found his range with a 48-metre penalty to open Gloucester’s account after nine minutes.

And although Bath enjoyed plenty of territory and possession, they could not make it count before Gloucester punished them through an incisive 20th-minute try.

Lloyd Evans weaved his way through Bath’s defence, before sending a scoring pass to Harris, and Twelvetrees’ conversion made it 10-0.

A Priestland penalty reduced the deficit, but he missed two other shots at goal, and Gloucester looked a more potent attacking threat heading towards half-time.

Bath could not find a way through, and another Twelvetrees penalty four minutes before the break secured a 13-3 interval advantage.

Twelvetrees and Priestland both missed long-range penalty chances early in the second period, and Bath sought inspiration as England wing Joe Cokanasiga went on for his first appearance since last autumn’s World Cup after recovering from a knee injury.

Gloucester, though, ripped Bath’s defence to shreds through a brilliant move that prominently featured flanker Jake Polledri before Banahan touched down and Twelvetrees converted.

Bath were virtually down and out, before giving themselves a lifeline through Dunn’s 61st-minute touchdown that Priestland converted.

And he struck again just five minutes later, rounding off relentless Bath pressure, with Priestland’s conversion setting up a grandstand finish that reached its conclusion when Boyce powered over and Priestland converted, before Spencer crossed.