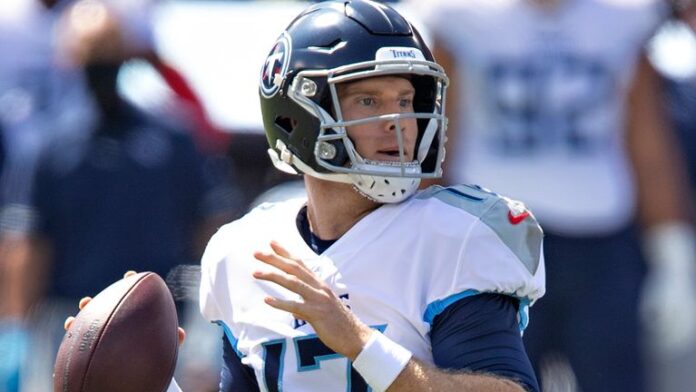 Joining Sky Sports’ NFL Overtime show – which you can watch every Tuesday night at 9pm – Adams hailed Tannehill’s play in the first two weeks of the season, which has seen him thrown for 488 yards and six touchdowns.

“Ryan Tannehill is very intriguing for me – from a fantasy perspective but also in real life,” Adams said.

“We look at the Tennessee Titans offence and we think it runs through Derrick Henry, he’s all that they have, but no, they paid Ryan Tannehill to be their guy and he’s out there making throw after throw, looking really good, making it happen.

“I love his matchup, from a fantasy perspective, this week against the Minnesota Vikings defence, which has a million questions.

“My sneaky sleep for you out there, right now, is Tannehill.”

And Adams doesn’t think Tannehill is just a flash in the pan either, considering him to be one of the best value quarterbacks in the league in 2020.

When asked who could be the biggest challengers to 2018 and 2019 MVPs Patrick Mahomes and Lamar Jackson, Adams said: “I think Tannehill is going to be one of them, I honestly do.

“Plus, there’s Aaron Rodgers – how he was drafted out of the top 12 of QBs in a lot of leagues seems bananas to me – and anybody from Big Ben Roethlisberger to Gardner Minshew.

“Watch what he [Minshew] does. He has DJ Chark, Laviska Shenault, a very questionable run game, and they’re going to be playing a lot from behind.

“You want to look for teams that have powerful offences or ones that are going to have the opportunity to throw and throw in the fourth quarter.

“Unfortunately for Jacksonville, their defence is suspect, so they’re going to have to keep throwing to be in these games. Minshew is a QB who can do that.”

“I’m going to start, for the first time in history, with a guy who does not have a team as of this morning. He’s had visits with the Giants and the Eagles; it seems inevitable that the signs somewhere and, if it is with the Giants, there’s a possibility that he ends up being the lead back. You need to scoop him up regardless, make sure that he is owned.”

“He had eight catches for 74 yards on Sunday. Christian McCaffrey is of course out – he’s expected to miss at least four weeks – and Davis’ receiving ability is big. The Panthers, unfortunately, will be trailing in games a bunch this year. And we’ve seen him have some success in this league already; he put up 700 yards and five touchdowns in 2017, even when splitting carries in Seattle. With Christian not there in Carolina, he’s in for a full workload on the ground and in the air.”

“Raheem Mostert and Tevin Coleman are both hurt. McKinnon has looked awesome so far, even though his action has been limited – 121 yards and two touchdowns on just nine touches – and now comes up against a struggling Giants defence. He’s super-efficient; scoop him up and put him in your lineup.”

“Cam Akers is out with a rib injury and Malcolm Brown dealing with a bit of a finger injury. Henderson flourished on Sunday with an opportunity – he had a touchdown and 121 total yards. Brown still got more touches and the finger injury likely isn’t super serious but, with Akers probably out for a bit, Henderson will still get chances to eat.

“Keep a lookout on the Freeman situation but, if he doesn’t land with the Giants, Lewis is the guy. On Sunday, he had 14 touches, 56 yards and a touchdown against a tough Bears defence. Like with Davis, I don’t mind adding a guy with real receiving ability on a team that is going to playing a lot of catch-up football this year. That is Lewis’ game.

“There is a true split in L.A. Head coach Anthony Lynn told us himself in the offseason – I didn’t believe him – but the Chargers are proving there is room for both Kelley and Austin Ekeler to eat. Ekeler is ranking at 19th for running backs in the NFL through two weeks, Kelley is 23rd. He has racked up 37 touches through two games, putting up over 100 total yards last week.

Sky Sports NFL will be your dedicated channel for NFL coverage through the season – featuring a host of NFL Network programming, a new weekly preview show as well as at least five games a week and NFL Redzone, you won’t miss a moment. Don’t forget to follow us on skysports.com/nfl, our Twitter account @SkySportsNFL & Sky Sports – on the go!