Home Culture Where Was the Battery at Tesla’s Battery Day? 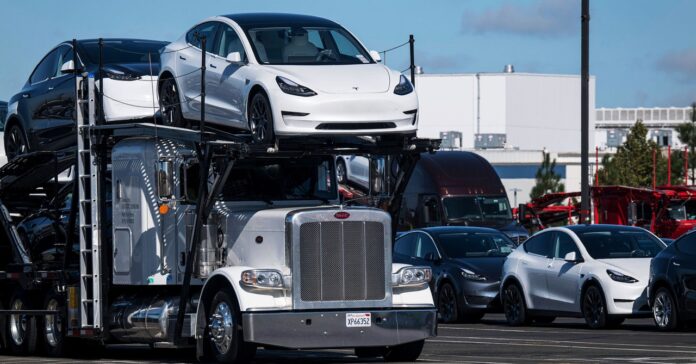 “Large format reduces all the ‘inactive’ materials, like packaging. So pack-level energy density will improve and cost will come down,” says Shirley Meng, a materials scientist who runs the Laboratory for Energy Storage & Conversion at the University of California, San Diego. It’s exactly the sort of beefy power supply that Tesla will need for its planned heavy-duty vehicles like the Cybertruck and its electric semi. But the real innovation in Tesla’s battery is what you can’t see.

In all EV batteries, a thin layer of copper foil serves as a current collector for the anode and a layer of aluminum foil for the cathode. A tab is joined to each of these current collectors and serves as the battery’s connection to the outside world. But these tabs hobble the performance of the cells and make them more difficult to produce. Manufacturers must use a specialized welding technique to connect them to the foil current collectors, which results in wasted time and material. Even worse, the tabs reduce the battery’s efficiency, because electric current must travel the full length of the electrode to reach each tab. One of the major innovations in Tesla’s new battery is that it is tabless.

“Taking the tabs out of the equation will allow you to have more coated area on your electrode, increasing the capacity of the cell without changing anything else about the design,” says Greg Less, the technical director of the University of Michigan’s Battery Lab. “It’s not a new idea, but there are a lot of engineering challenges to making something like this work reliably and reproducibly.”

The key to Tesla’s battery breakthrough was an image emblazoned on the black graphic t-shirts worn by Baglino and Musk: What looked like a bunch of random white lines was, according to Musk, a “very esoteric” representation of a tabless battery’s structure. According to Baglino, the company laser-patterned existing foil current collectors so that they can have dozens of connections to the electrode materials. The result is a current collector that Baglino described as a “shingled spiral” that looks a bit like a curled up, copper-plated armadillo.

“The distance the electron has to travel is much less,” Musk said. “So you actually have a shorter path length in a large, tabless cell then you have in a smaller cell with tabs. So even though the cell is bigger, it actually has a better power-to-weight ratio.”

Researchers at Tesla also significantly altered the chemistry of their electrodes to boost performance. Tesla is now one of several manufacturers producing silicon-rich anodes, which are meant to supplant the more common graphite anodes used in lithium-ion batteries today. When a lithium-ion battery is charging, lithium ions flow to the anode, displacing electrons and creating an electric charge. Compared to graphite, silicon can absorb a lot more ions.

“Silicon can store roughly 10 times the number of lithium atoms as graphite, which gives silicon-containing batteries 20 to 40 percent higher energy density,” says Francis Wang, the CEO of NanoGraf, a company that has developed a silicon-graphene battery anode. But silicon can also cause the battery to swell like a balloon. Over time, wear and tear on the components will make performance plummet. Safely incorporating silicon into an anode typically requires nanoengineering the cathode components in ways that contain the swelling. Nanograf, for instance, wraps its silicon-based anodes in graphene, which acts like a flexible blanket when the anode expands, protecting it from corrosion.

Tesla has been using small amounts of silicon oxide in its anodes for years. This silicon blend effectively comes prepuffed to reduce damage from swelling, but this means it also enables only modest performance gains. To get a bigger boost typically requires nanoengineering the particles of silicon to retain their benefits as lithium ion sponges while reducing the risk of destruction. But Baglino and his team opted to take a simpler route. Their silicon anodes aren’t nanoengineered at all; they’re raw silicon stabilized with some elastic ions. According to Baglino, this can increase the range of Tesla’s vehicles by 20 percent.

Reese Witherspoon on Hello Sunshine, helping “people who have felt other for so long”