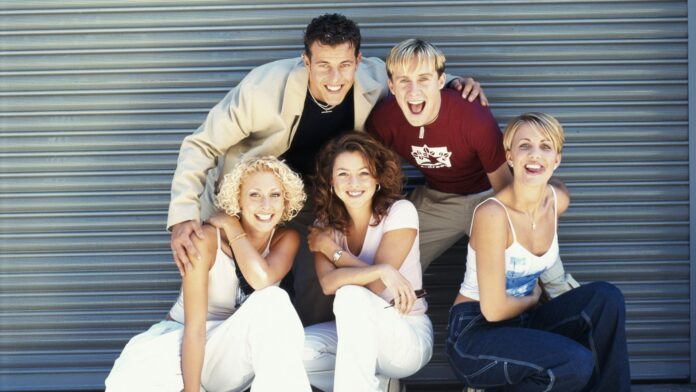 When Steps recently announced they were returning with new music and planning a tour for next year, it’s fair to say their fans were more than a little excited.

The group, who rose to fame in the 1990s and are best known for chart anthems including Tragedy and 5,6,7,8, released their last album more than three years ago, but it seems appetite for their brand of upbeat disco-pop hasn’t waned since then.

Lee Latchford-Evans from the band tells Sky News that despite the success of 2017’s Tears On The Dancefloor, they were still a little apprehensive ahead of their recent comeback – and it was a relief when the announcement earlier this month was so well received.

“We were seeing, like, ‘Steps have saved 2020’ and things like this,” he says. “I wouldn’t quite go that far but it’s nice to be appreciated.

“It’s nice to have people be very positive towards us again. And I think, you know, we are living in very strange times right now; we don’t really know what’s around the corner, but we’re doing our best to get there.”

Steps were due to announce the new music and tour back in the spring, but like so many the group had to put their plans on hold due to the coronavirus pandemic.

Latchford-Evans says the first single, called What the Future Holds (from the forthcoming album of the same name, and written by Australian popstar Sia), has been a long time coming.

“We filmed the video for What The Future Holds actually almost a year ago and the single was first dropped on to our manager’s desk almost three years ago,” he says.

“It was back when we were finishing off our last tour, the Tears On The Dancefloor tour, and we were deciding, should we carry on? Would we look at new music?

“What The Future Holds landed, it was obviously a very different version with Sia on it, and we sort of loved it as soon as we heard it.”

The singer says the track, which went to number one on iTunes within an hour of release, stood out to them as it represents what the group is trying to achieve.

“There’s a lyric in there that’s ‘one foot in the past, one foot in the future’, and as soon as we heard that lyric we were like, that’s just got Steps written all over it – that is us.

“We’ve got the nostalgia of all our old hits, but we’re doing new music, it’s just perfect for us.”

As well as pushing back the album release, the plans the group had to put on ice included touring Australia with the also newly reformed Pussycat Dolls.

Latchford-Evans is philosophical about the changes, but says he can’t wait to get back on the road.

“We always say our tour is our baby, it’s what we’re about, it’s what we do best. Don’t get me wrong, we love being in the studio and we love creating, but when we’re on tour that’s really what it’s about.”

The band took a 10-year break between 2001 and 2011, and there has been more than a three-year gap between their last record and What The Future Holds.

But it seems fans shouldn’t worry about them taking more time out, as Latchford-Evans says he suspects they will continue working together for the foreseeable future now, due to a a significant milestone ahead.

“We’ve been talking about it and we probably would have had a tiny break because I think it’s so intense when we are working together and especially when things are successful – which obviously we can’t complain about, it’s amazing – but it’s quite long days and it’s back to back,” he says.

“So it’s nice to have that little break at the end, then just disappear for a few months, recharge and come back – but with this one, because of the coronavirus and the way that everything’s been halted, we were talking that in 2022, it will actually be 25 years of Steps, believe it or not.

“I think we have to do something for our 25th anniversary, so I can imagine this whole project now kind of continuing for the next two or three years, really.”