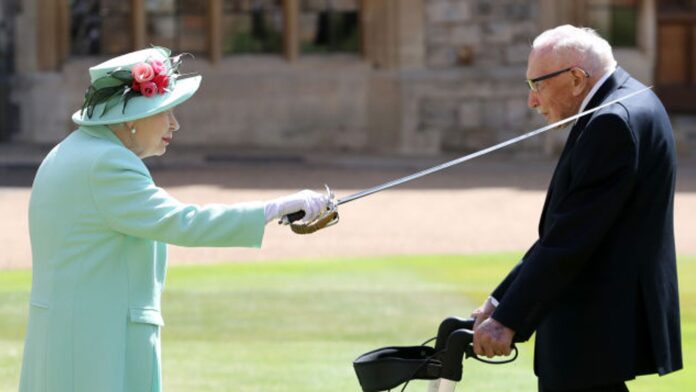 Captain Sir Tom Moore will have a film made about his life, following a fierce bidding war over rights to his story.

The World War II veteran, who raised £38.9m for the NHS by walking laps of his garden, has also broken two Guinness World Records, scored a Number One single and been knighted by the Queen.

The centenarian joked: “I don’t know of any 100-year-old actors but I’m sure Michael Caine or Anthony Hopkins could do a wonderful job if they were prepared to age up!”

Earlier this month, on the publication of his autobiography and the launch of his charity foundation, he said he would love David Beckham to play him due to his “charm”.

Described as “uplifting” and “life-affirming”, the biopic is being fast-tracked and will be shot next year.

It will focus on the former British Army captain’s relationship with his family, and how he inspired them after moving into their home following the death of his wife.

The movie will also draw on his military career and look at the way personal grief and the horrors of war helped him develop a determination that has shaped his life.

After a long battle with skin cancer, Sir Captain Moore suffered a broken hip and was told he would never walk again, but at the age of 99 he ordered a treadmill and began rehabilitation.

He set out to walk 100 laps of his garden in Marston Moretaine in Bedfordshire before his 100th birthday on 30 April, hoping to raise £1,000.

However, his strength of character captured the public imagination and within days he had raised tens of millions of pounds for NHS Charities Together.

The film will be made by Fred Films and Powder Keg Pictures, whose previous credits include Fisherman’s Friends, about the Cornish fishermen who signed a record deal, and Finding Your Feet, about a middle-aged woman finding freedom through dance.

Writers/producers Nick Moorcroft and Meg Leonard said in a joint statement: “This is a story about the power of the human spirit and Captain Sir Tom personifies that.

“We are honoured to be telling this unique and inspiring story and are excited about audiences getting to know the man behind the headlines.”

Producer James Spring said: “At a time of fear and uncertainty 161 countries around the world embraced the beacon of hope that Captain Sir Tom provided. We are privileged that Tom and his family have entrusted us to tell their story.”

Sir Captain Moore’s daughter Hannah Ingram-Moore said: “We received so many offers but what it boiled down to was trust.

“The family are big fans of the films James, Meg and Nick have written and produced and we hope that our story connects with audiences in the same way their previous films have done.”

The production companies’ next joint release is Blithe Spirit, based on a Noel Coward play, which will star Dame Judi Dench as a clairvoyant called Madame Arcati, and is out on Boxing Day.