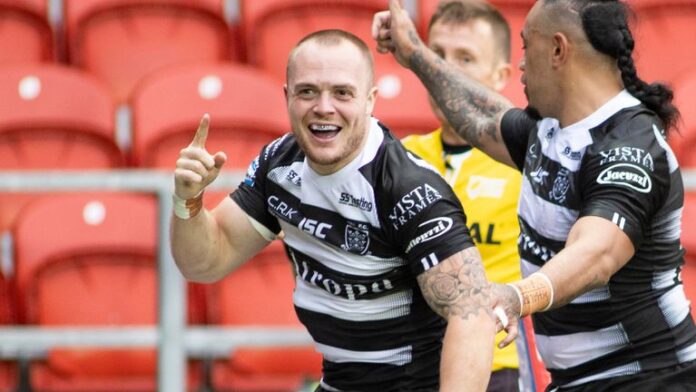 “This game without supporters is a game which wouldn’t be able to survive. It’s desperately important they stick with the game and stick with us. We need them back in the ground as soon as possible”

Hull interim head coach Andy Last has described the decision to scrap plans to allow fans back into matches as “devastating” and warns it could have serious long-term consequences for the game.

The Rugby Football League’s plans to pilot crowds of 1,000 people at four games next week fell victim to a tightening of Government restrictions following a worsening of the coronavirus pandemic, and chief executive Ralph Rimmer has admitted playing the major finals without crowds now “looks likely”.

While clubs continue to play behind closed doors in order to fulfil their television obligations, Last fears fans could lose the habit of attending matches.

“It’s devastating,” Last told his weekly news conference. “The supporters make such a difference to the players.

“The atmosphere they can create is important so not having the crowd there has an impact.

“When you’re struggling they can lift you and I think that’s one of the big reasons players play the game, that interaction with supporters.

“The passion of the supporters floods onto the field and can trigger passion from the players.”

Hull are traditionally one of the best supported clubs in Super League. Last season they enjoyed an average crowd of 11,478 and earlier this year drew 19,599 for the derby with Hull KR.

“It’s a huge, huge reason why this club is where it’s at,” Last added. “They can be difficult to please sometimes but they turn up week in, week out and we’re very fortunate to have such a loyal fan base.

“That’s why it’s so important we get through this Covid situation and start performing in front of live audiences again. We can’t have them drift away from the game because they are the lifeblood of the game in my opinion.

“This game without supporters is a game which wouldn’t be able to survive. It’s desperately important they stick with the game and stick with us. We need them back in the ground as soon as possible.”

Hull’s next Super League match is against Salford, live on Sky Sports Arena, as part of a triple header at Warrington’s Halliwell Jones Stadium on Thursday.

They are reeling from a 36-4 defeat to Wigan in the Challenge Cup and still have sore memories of a 54-18 hammering by Salford in the first game back from lockdown in August.

The Red Devils, on the other hand, are on a high following their cup quarter-final win over Catalans Dragons, but coach Ian Watson insists they will not have an eye on their semi-final with Warrington on Saturday week.

“We talk about processes a lot within our group and we need to make sure that they’re right for that semi-final and to do that we need to be playing games,” Watson said.

Former Huddersfield second rower Oliver Roberts is set to make his first appearance since the resumption with an opportunity to push for a place in Watson’s semi-final line-up.

“People going into this game against Hull need to lay down a marker to grab a semi-final shirt,” Watson said.

Like Salford, Leeds are facing the prospect of playing three games in 10 days, culminating in a semi-final, but coach Richard Agar says his players will only have their minds on Thursday’s league game against Hull KR.

“We want to go into the semi-final in form and the right frame of mind,” Agar said. “We’re not looking too far ahead – it’s one step at a time.”

The two teams met only five days ago when the Rhinos cruised to a 48-18 cup victory, taking their points tally in two games against the Robins in 2020 to a century, but Agar will not take Tony Smith’s men lightly.

“The fact that Tony is changing his team will give them a renewed energy and obviously they want to right some wrongs from last week,” he said.

In Thursday’s other game, Huddersfield’s caretaker coach Luke Robinson will be hoping to make it two wins out of two after the Giants ended their five-match losing against Wakefield when they face Castleford.

“We made massive strides forward but we’re not getting carried away,” Robinson said. “Hopefully we can take another step forward this weekend.”