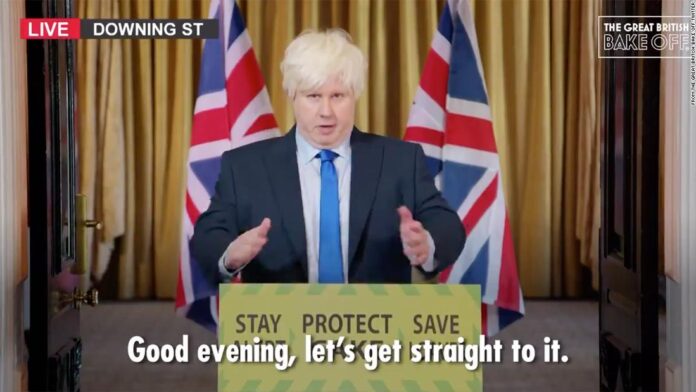 The 46-year-old star — best known for comedy sketch show “Little Britain” and the movie “Bridesmaids” — made his debut on the hit TV cooking contest after replacing fan favorite Sandi Toksvig as host.
Wearing a floppy platinum blond wig and standing at a lectern featuring the slogan: “Stay Alert, Protect Cake, Save Loaves,” Lucas perfectly mastered Johnson’s distinctive voice as he spoofed the PM’s coronavirus briefings.
He began the sketch by telling viewers: “Good evening, let’s get straight to it.
“We are now approaching phase 46, which means that from Tuesday morning or Wednesday evening, depending on your height, we are saying, with regards to baking, if you must bake in a tent, bake in a tent, but please don’t bake in a tent…”
He added: “We are asking people to use common sense with regards to the distribution of hundreds and thousands.”
Co-host Noel Fielding — introduced by Lucas as “the lady in the funky dress” — then appeared via video link to ask a question about the correct pronunciation of “scone.”
Coincidentally, the skit aired minutes after Johnson addressed the nation about new measures to curb the spread of coronavirus — including a 10 p.m. curfew for restaurants and bars in England.
This is not the first time Lucas has taken aim at Johnson. The star went viral back in May after sharing a video on Twitter following Johnson’s announcement of the “careful steps” the government planned to take to ease lockdown restrictions.
Lucas seized the opportunity to share his interpretation of the messaging, which was widely criticized for a lack of clarity.
“So, we are saying don’t go to work, go to work, don’t take public transport, go to work, don’t go to work,” he said.
“Stay indoors, if you can work from home go to work, don’t go to work.”
“Go outside, don’t go outside. And then we will, or won’t, something or other.”