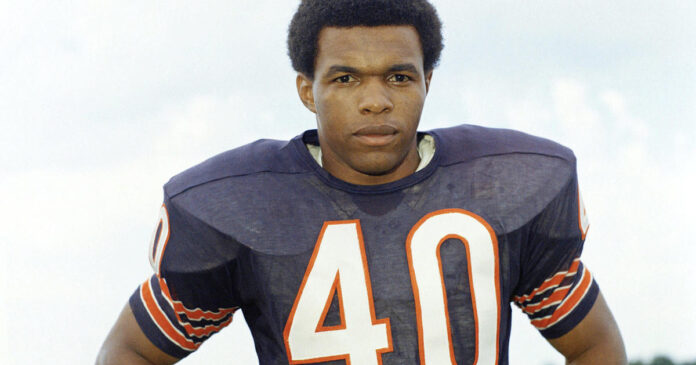 NFL icon Gale Sayers has died at the age of 77, the Pro Football Hall of Fame announced Wednesday. Sayers is well-known for his seven seasons with the Chicago Bears, which helped him become the youngest player ever inducted into the Hall of Fame.

Nicknamed the “Kansas Comet,” Sayers passed away on Wednesday morning. While no cause of death has been released, relatives of Sayers said the health decline was due to a long battle with dementia.

While Sayers’ career was short, his impact on the team — and football as a whole — spans far longer than 1965-1971. He won Rookie of the Year in 1965 after scoring a record 22 touchdowns, six of them occurring in a single game. After becoming an All-Pro player in 1968 and winning the league’s rushing title in 1969 following a knee injury, Sayers began the difficult task of helping his fellow teammate Brian Piccolo through his fight with cancer.

The two became friends after the league de-segregated, helping each other through numerous difficulties. When Piccolo was diagnosed, Sayers stayed with him until the very end. Their friendship was documented in Sayer’s autobiography “I Am Third,” and later made into an Emmy Award-winning television film “Brian’s Song.”

Sayers retired from the NFL in 1972 as the all-time leader in kickoff return yards. In 1977, he made history once again by becoming the youngest player ever to be inducted into the Pro Football Hall of Fame. He was 34 years old.

Sayers used the rest of life after football to start a variety of careers, including athletic director at Southern Illinois University-Carbondale, a sports administrator, and a stockbroker. He also used his football prowess to start and fund several inner-city youth initiatives for the City of Chicago. Before his death, and while his health was declining, Sayers appeared at the Bears’ centennial celebration, where he received a standing ovation from the crowd.

“The NFL family lost a true friend today with the passing of Gale Sayers,” said NFL commissioner Robert Goodall. “Gale was one of the finest men in NFL history and one of the game’s most exciting players. We send our heartfelt condolences to his wife Ardie, and his family. Our thoughts are with his teammates, the Bears organization, the many fans who remember him as a football player, and the many more people who were touched by Gale’s spirit and generosity.”