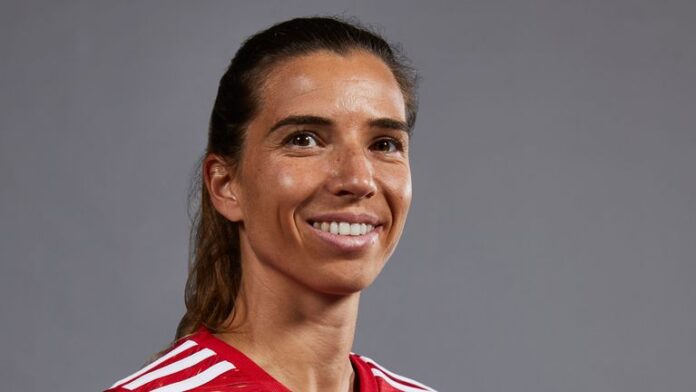 Two-time World Cup winner Tobin Heath says she was drawn to Manchester United by the reputation of manager Casey Stoney.

There is a sprinkling of American stardust in this season’s Barclays FA Women’s Super League, with Alex Morgan joining Tottenham after Sam Mewis and Rose Lavelle signed contracts at Manchester City.

The red half of Manchester will also have a pair of World Cup winners in their side, with United recently completing the signing of Christen Press and Heath until the end of the 2020/21 season.

They are big moves for Casey Stoney’s side and forward Heath, capped 168 times by her country, cannot wait to line up for the club having come through the requisite quarantine period.

“It’s a big move, especially during a time like this,” the double Olympic gold medallist said.

“Obviously Manchester United’s tradition and history speaks for itself. We’re all familiar with it.

“Honestly, it was a great opportunity to play a full season and to compete for a title and that’s what I felt like I needed and it provided a really great place for that.

“I was really drawn in by the manager Casey Stoney and her reputation and what I had heard about her and then becoming more familiar with the team that was something I felt like I could really come here and build upon and help out and learn and grow.

“So far, I’m really happy about my decision to join the club, it’s been great.”

Heath has spent the majority of her career with the Portland Thorns but had been keeping her eye on the WSL, having previously played in Europe at Paris Saint-Germain.

The 32-year-old freely admits she did not expect to be moving right now given the backdrop, but the project at a club only formed in 2018 excited her.

“Chris and I were talking about this, when Manchester United came into the league I remember saying ‘wow, this is huge – this is huge for a club like this to have a women’s team’,” Heath said.

“It’s so important for clubs with all this tradition, history, power, influence.

“We see it in America all the time, how much the badge in the club means.

“It’s huge for them to have a women’s team and to see the progress that they’ve made and what they’ve put into it.

“It’s so encouraging for the global game at large, so, yeah, we need more of this and I’m happy to be part of it.”

Heath feels she had a very English-influenced football education – from her coaches growing up to watching the Premier League and supporting Arsenal – so this move feels special and exciting in equal measure.

And even with everything the 32-year-old has achieved, she said putting on the training kit for the first time “felt enormous in a way that was really special in kind of like a childhood dream type way”.

Now comes the chance to play alongside her long-time international team-mate Press and against a number of other United States internationals.

“The badges are huge,” Heath said. “You have such a young history in terms of football in the US so it’s something that is going definitely bring a different weight to the shirt.

“We compete with each other and against each other all the time, so it’s something we’re very familiar with.

“I was honestly really excited when I saw that Rose and Sam were coming over because I thought it’s a very uncomfortable time and to be uncomfortable and make that move I thought was enormous and I have huge respect for that, because it’s not an easy decision and just shows how much they value their career.

“Just having everybody over here there’s kind of that nice familiarity about it but I think we’re all used to the competition at this point.”