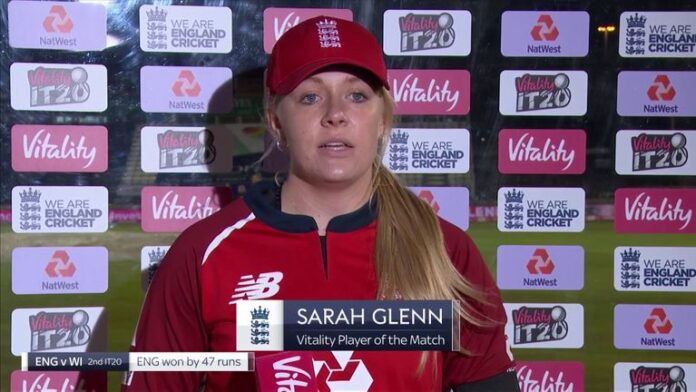 Sarah Glenn wants to be considered “a genuine all-rounder” at international level after starring with bat and ball as England Women went 2-0 up in their T20 series against West Indies.

Leg-spinner Glenn top-scored with a belligerent 26 off 19 balls after coming in at number eight to lift her side to 151-8 following a middle-order slump in the second of the five-match series at Derby.

West Indies seemed on course to challenge that total when Deandra Dottin and Stafanie Taylor put on 61 for the second wicket, but Glenn accounted for both and sparked a collapse as England triumphed by 47 runs.

“I’ve been wanting to work my way up the order as well, so it felt a special moment to get some runs. I’ve been working hard on my batting over the last couple of years.

“The time off after the Covid-19 outbreak did me good, I think – just to clear my head and I came back with a fresh mindset to try and be really positive.

“I want to keep playing in my attacking way, whatever the situation is and I keep reminding myself of that every game.”

Derby-born Glenn – who was named player of the match on her home ground – was given solid support by fellow spinners Sophie Ecclestone (2-19) and Mady Villiers (2-10).

All three impressed as the West Indies’ batting quickly fell apart and Glenn says the spin trio form a close-knit unit both during matches and away from the game.

“We click really well together, on and off the field,” she added. “I feel I can talk to them about anything and we help each other on the pitch.

“We’re talking about how the pitch is playing, what’s the best ball to bowl and off the pitch we all have a good laugh. We’re just really happy seeing each other do well.

“This is the ground I grew up playing on as well, so it felt like a special moment and I’m glad to make people at home proud as well.”