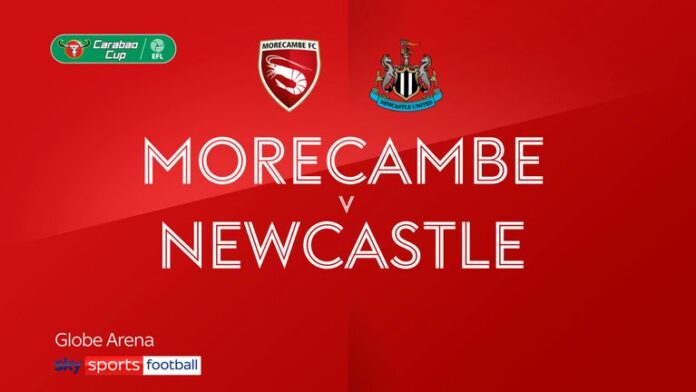 Brighton set up Carabao Cup fourth-round tie against Manchester United with Arsenal facing either Lincoln or Liverpool, who play on Thursday, live on Sky Sports; Everton and Chelsea also win on Wednesday

Joelinton’s brace helped Newcastle on their way to a 7-0 demolition of 10-man Morecambe in the Carabao Cup third round.

Having been humbled at home to Brighton on Sunday, Steve Bruce’s men emphatically booked a fourth-round trip to Newport as his much-changed side ran amok at the empty Mazuma Stadium.

Joelinton netted twice as Newcastle hit five in an opening period made all the more difficult for Morecambe by Toumani Diagouraga’s red card, with the hosts digging deep to restrict the Premier League side to just two more after the break.

There were plenty of big names on display despite Bruce’s nine changes in Lancashire, where £40m signing Joelinton gave the visitors an early lead.

Miguel Almiron rounded the goalkeeper to add another, before Jacob Murphy curled home and the Magpies’ Brazilian frontman scored a screamer from distance.

The League Two side saw Diagouraga sent off for a lunge on Sean Longstaff before Isaac Hayden smashed home in stoppage time as Newcastle scored five first-half goals in a match for the first time since 1993.

The second period was one of damage limitation for Derek Adams’ Shrimps, who only conceded Jamaal Lascelles’ header and a Sam Lavelle own goal despite the continuing one-way traffic.

Arsenal are through to the fourth round of the Carabao Cup after a 2-0 win over Leicester at the King Power Stadium.

Christian Fuchs’ second-half own goal gave the Gunners the lead and Eddie Nketiah bundled home in stoppage time to add gloss to the victory for Mikel Arteta’s side.

The result maintains their strong start to the season and secures a possible trip to Anfield to face Liverpool if the Premier League champions can beat Lincoln City on Thursday.

Kai Havertz scored a hat-trick as Chelsea romped to a 6-0 victory against Barnsley. Tammy Abraham opened the scoring for a much-changed Chelsea side, and Havertz doubled their lead before the break. Barkley then notched a third at Stamford Bridge on Wednesday night, before Havertz added two more.

It was a night of good news for Chelsea’s new signings and Frank Lampard as Thiago Silva made his debut for the club, and Ben Chilwell also enjoyed a first appearance for the club off the bench – assisting a late sixth for fellow substitute Olivier Giroud.

Everton goalkeeper Jordan Pickford was left wishing he had been rested for the 5-2 win at League One side Fleetwood after two errors of judgement made for an awkward night.

The visitors were coasting at half-time through two Richarlison goals only for England’s number one to blunder three minutes after the restart.

Alex Iwobi looked to have rescued his team-mate with a goal less than two minutes later only for more indecision from Pickford, who sat out the previous round last week to allow Joao Virginia to make his debut, to lead to another goal.

It made for an uncomfortable final half-hour even after Bernard fired home a fourth and substitute Moise Kean scored with Everton’s last kick of the night.

Brighton set up a Carabao Cup fourth-round clash with Manchester United as they eased past Preston 2-0 at Deepdale.

Second-half goals from Alireza Jahanbakhsh and Alexis Mac Allister were enough for the Seagulls to advance, and they will now host Ole Gunnar Solskjaer’s side next week.

Jahanbakhsh left Preston goalkeeper Connor Ripley with little chance when he rifled home a powerful shot just before the hour – and Mac Allister made sure when he thumped home from Pascal Gross’ pull-back a little over quarter of an hour later.

Preston were left to rue a Patrick Bauer header which struck the crossbar in the first half but could have few complaints as Brighton finished the game the stronger of the two sides.

A thunderbolt from Josh Brownhill sent Burnley on their way to a 2-0 victory at Millwall.

The wonder strike on the stroke of half-time, coupled with Matej Vydra’s late effort, gave Sean Dyche a victory at his old club and means this is the joint-furthest the Clarets have gone in the competition since the 49-year-old took over in 2012.

Progress came at a cost with forward Jay Rodriguez injured early on, but it will be Burnley who host the Thursday night winner of Manchester City or Bournemouth at Turf Moor next week.

Bobby Decordova-Reid scored for the second successive match as Fulham eased to a 2-0 win over Sheffield Wednesday to set up a fourth-round tie with local rivals Brentford.

Reid, who was on target in Saturday’s 4-3 loss at Leeds, slotted in Josh Onomah’s centre to double the hosts’ lead in the 32nd minute at Craven Cottage

Aboubakar Kamara had put the Premier League side on course for a relatively comfortable evening against lower-league opposition by turning home Anthony Knockaert’s ninth-minute pass.

Scott Parker’s side will make the short journey to the Brentford Community Stadium in the last 16, a repeat of last month’s Sky Bet Championship play-off final.

Wednesday, the last club from outside the top flight to lift the League Cup following victory over Manchester United at Wembley in 1991, produced a spirited display in west London but never seriously threatened to spring a surprise result.

Striker Tyrese Campbell’s first goal of the new season helped Stoke beat Gillingham 1-0. Campbell’s clinical 37th-minute finish did the damage as the Championship side claimed their first home win of the season at the bet365 Stadium.

It was Campbell’s first goal since the start of July when he bagged a brace in a 4-0 win over Barnsley, a result which helped Michael O’Neill’s side retain their Championship status last season.

Victory was also Stoke’s first home win over Gillingham for 16 years having last beat them 2-0 in their own backyard on 21 August 2004.

And the home side, who face either Aston Villa or Bristol City in the next round next week, could have won by more if it had not been for a couple of smart saves from Gills keeper Joe Walsh and if Josh Tymon had not struck the crossbar with a thunderbolt strike.