Home Sport Minshew Mania no longer a gimmick for the Jags 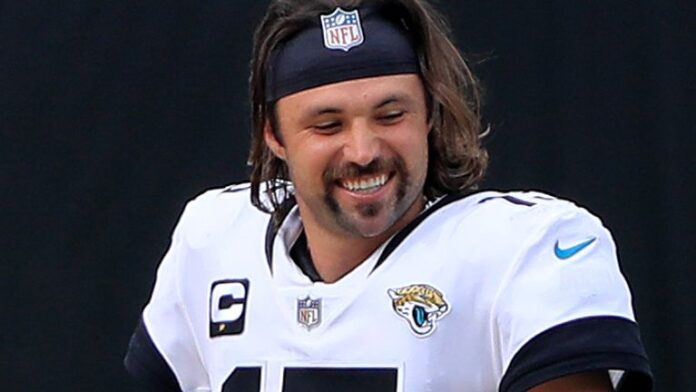 Watch Minshew in action for the Jaguars against the Dolphins on Thursday Night Football, live on Sky Sports NFL from 1.20am Friday

If the Jacksonville Jaguars wanted long locks flowing in the wind under center, Gardner Minshew is here to tell them they need not turn to Trevor Lawrence.

The moustachioed, tank-top wearing quarterback is doing his utmost to quash the prospect of the Jags claiming the Clemson star, who is widely-deemed the consensus No 1 pick at the 2021 Draft. This is Minshew’s team, now.

His colourful appearance has combined with the Jags’ turbulence behind the scenes and the fact he was a sixth-round pick in evoking a sense of irony to his success. But ‘Minshew Mania’ should not distract from the development of a capable starter and the professionalism of the 24-year-old in helping to navigate the franchise through a period of ridicule.

Minshew’s impact has gone beyond spearheading the Jags’ competitive start to the season and reached a point at which he is galvanising what looked a fractured organisation to come together.

The moves. 😱
The mustache. 👨@GardnerMinshew5 is absolutely electric. #DUUUVAL

“I see a superstar,” said Jaguars defensive end Josh Allen after the Week One win over the Indianapolis Colts.

“I think, in my eyes, I do believe Gardner is a superstar. I think he’s a great quarterback. I feel like he’s shown that many times and he’s going to continue to show that. He has the whole team, the whole organisation behind him.”

Minshew himself provided a damning answer to the value of the Jags signing Nick Foles on a four-year, $88m deal in 2019 by dislodging the Super Bowl champion from the starting job. By the end of the season he had thrown for 3,271 yards, 21 touchdowns and six interceptions as well as rushing for 344 yards off 67 carries in 14 games.

He carried that promise into this season, going 19 of 20 for 173 yards and three touchdowns to lead his team past the Colts before lifting the Jaguars from 21-7 down and later 30-17 down to push the Tennessee Titans all the way in a 33-30 defeat.

In doing so he became the first Jaguars quarterback ever to throw for three or more touchdown passes in three consecutive games.

“I think every time we step out there, we’re always trying to prove what we are,” said Minshew. “But more than anything, we really don’t have to prove it to anybody else, we believe in our locker room. And as long as we have that and people in our locker room believe, then that’s our main concern.

“Those were two very good teams, two very good divisional teams we’ve played so far. [We] competed well, had a chance to win both. So, it’s just taking those good things we’ve done and building on those and then trying to fix the stuff that we haven’t done well.”

The Miami Dolphins arguably overachieved with limited roster talent under Brian Flores in 2019, and you get the feeling this young Minshew-led Jaguars outfit could do the same in 2020.

Stay up to date with the latest news, interviews and features from around the NFL

Establishing a new culture has loomed as a defining job in Doug Marrone’s tenure as head coach, and right now there appears to be a greater harmony on and off the field than the Jaguars have had in some time.

High-profile departures may have inflicted a dent to the talent at their disposal, but perhaps that has been for the best for a team frustrated by its inability to build on a 2017 season in which they reached the AFC Championship game.

Jalen Ramsey forced through a trade to the Los Angeles Rams in October 2018 after a dispute with Marrone, not long after owner Shahid Khan had insisted the cornerback would be staying put. Then, in the same month ,Yannick Ngakoue was restrained by Calais Campbell amid a locker room altercation after a loss to the Houston Texans.

Last season raised question marks over who was running the team, with the presence of Tom Coughlin as executive vice-president of football operations, for all of his success as head coach of the New York Giants, appearing to diminish the influence of Marrone.

Coughlin was eventually fired in December after the NFLPA issued a public warning to free agents against signing for the Jaguars due to his supposed disregard for player rights, Dante Fowler claiming he had been fined a total of $700,000 for not attending rehab sessions that were ruled optional under the collective bargaining agreement.

The hiring of pass-heavy offensive coordinator John DeFilippo in 2019 later appeared to be incompatible with an offense led by running back Leonard Fournette, while the arrival of Foles represented a significant, and eventually wasted, hit on the salary cap.

Trading away cornerback AJ Bouye and defensive end Campbell this summer invited criticism over the loss of valuable experience, before the Jaguars also had to contend with a wantaway Ngakoue.

He was finally traded to the Minnesota Vikings in August after spending the offseason publicly expressing his desire to leave, including in a Twitter exchange with team executive Tony Khan. To follow that up, the Jaguars released Fournette after three seasons and traded safety Ronnie Harrison to the Cleveland Browns.

The result is a new look Jacksonville, one seemingly of fewer overpowering voices that have now been replaced by a youthful nucleus.

“A lot of us, sometimes, we can tend to lose faith in team, just the word team,” said Marrone earlier this month.

“This team has really instilled that faith for me. With no disrespect to any other team I’ve been on, outside of just being a line coach and having your own room, this is the closest I’ve felt to a team since I’ve been a head coach.”

The Jaguars have stumbled upon rebuild mode earlier than anticipated after that 2017 season, but with the exodus of players and staff it is something Marrone is prepared to embrace.

Playmakers are beginning to emerge in their numbers on Jay Gruden’s offense, DJ Chark continuing to grow as Minshew’s lead receiver with the speed to create separation and mix of height and positioning to come down with 50/50 deep balls.

Undrafted rookie running back James Robinson has been a welcome surprise in beginning to justify the decision to part ways with Fournette, while rookie wide receiver Laviska Shenault is already proving a powerful and intelligent option on the outside as well as in the backfield.

On a young defense Myles Jack appears to be benefitting from the move to weak-side linebacker, which has been complemented by the arrival of Joe Schobert on the inside in bringing improvement against the run, an area the Jags ranked 28th in last season. Sunday’s loss to the Titans saw them give up just 84 rushing yards off 25 carries from Derrick Henry.

The No 9 overall pick CJ Henderson has, meanwhile, wasted no time in locking down the starting cornerback job after coming up against the likes of TY Hilton and Corey Davis across the first two weeks.

Defensive coordinator Todd Walsh also finds himself with an intriguing project in rookie defensive end and LSU product K’Lavon Chaisson, who described himself as the ‘most valuable player at the draft’ on the basis of his versatility to pass rush, stop the run and assist into coverage.

“What I like about K’Lavon outside of what he does and what he brings to the game physically, is his ability to want to be a student of the game,” said former NFL defensive tackle Marlon Favorite, who was a BCS national champion with LSU in 2008.

“What I like about his mindset more than anything else is he knows it was more play the run first, pass rush later. This kid has pass rushing ability. I’ve watched him do those moves I needed to see.”

Wins will not be easy to come by for a maturing team this season, but ‘Minshew Mania’ is at the foundation of a united and focused effort to discover a new direction for the Jaguars.